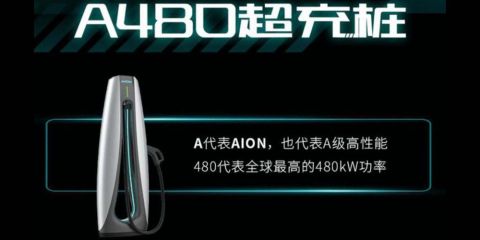 Aion, a sub-brand of the Chinese automobile manufacturer Guangzhou Automobile Corporation (GAC) has officially unveiled an EV charger that is said to be almost twice as powerful and efficient as the best Superchargers available today. Unveiling the A480 fast charger, GAC Aion claimed that the charger is capable of replenishing the batteries of the EV from 30 per cent to 80 per cent within five minutes.

Its top charging power has been reported at 480 kW. More precisely, the company claimed that it can deliver 35.1 kWh in merely 4 minutes and 50 seconds. The charging time span claimed by the manufacturer is almost the same as that of fueling up an ICE vehicle.

The Chinese manufacturer also claimed that the A480 was unveiled after it successfully passed around a dozen different safety standard tests. Thus, it can’t only deliver the advertised speeds, but also perform charging safely.

The power and speed of the new EV charger is quite impressive, but its charging power is well below last week’s rumors speculating that it would have a power of 600 kW.

Last week, some media outlets published some photos showing a GAC Aion V electric car getting charged at 481 kW with its battery state at 80 per cent. At the time, speculations were high that the Chinese manufacturer would launch a 600 kW EV charger.

Trouble-free, fast charging is undoubtedly a key to the mass adoption of electric cars as range anxiety continues to be one of the biggest concerns among potential buyers when it comes to make a shift from conventional internal combustion engines (ICEs) to EVs.

Aion, which focuses specifically on EVs, is thus trying to produce and offer fast chargers as it would undoubtedly give a big boost to its EV sales. Currently, it is selling four EVs. It much-awaited all-electric Aion V SUV will hit roads sooner than later. The upcoming SUV will come loaded with a graphene-based battery to support its new fast chargers.

So-called graphene batteries are not only capable of delivering 1,000 km (621 miles) NEDC range on a single charge, but they can also be constantly rapid-charged without affecting the life of the battery pack. Originally, GAC was also promising a range of 1,000 km for the AIon V SUV. However, the company’s official website now shows a range of up to 600 km for the upcoming EV.