China to reopen Tibet for tourists on April 5 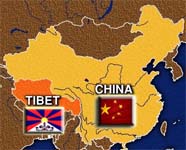 Beijing  - China will reopen its Tibet Autonomous Region to foreign tourists from April 5, following the suspension of visits during sensitive anniversaries, state media said on Monday.

"Travel agencies, tourist resorts and hotels are well-prepared for tourists," Bachug was quoted as saying.

"Reception work was suspended in March for the sake of travellers' safety," he said.

Bachug told the agency that tourist agencies had already booked more than 100 foreign tour groups to visit Tibet from April.

Paramilitary police have sealed off almost all Tibetan areas of China to foreign journalists and tourists for nearly one month, while the government has tightened border security and cut off some text messaging and other mobile telephone services in Tibetan areas.

The crackdown came amid reports of several small protests and a civil disobedience campaign by Tibetans around the 50th anniversary of a failed uprising against Chinese rule.

It was also designed to ensure there were no repeats of the widespread anti-Chinese protests in Tibetan areas last spring.

The government held a new Serfs' Emancipation Day on Saturday to mark 50 years of socioeconomic reforms in Tibet under China's ruling Communist Party.

The Tibetan exile group Students for a Free Tibet dismissed Saturday's event as a "blatant propaganda ploy by the Chinese government to convince the world that Tibetans are happy under Chinese rule".

The group organized a protest on Saturday in Dharamsala, the seat of the Tibetan government-in-exile, against "50 years of Chinese oppression" in Tibet. (dpa)