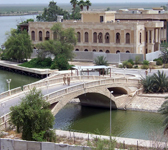 The British forces have quitted Basra Palace, Saddam Hussein’s quondam southern residence that became popular British base after the success of the US-led invasion.

The move has indicated the British disengagement from the conflict, and has highlighted the growing and public discord between Washington and London over Iraq. However, the America feels that the move will severely undermine security.

Basra Palace palace was originally due to be handed over to Iraqi authorities in early August. But it was delayed under pressure from the Americans who remain unhappy about the pullout.

The British decision to quit Basra Palace is the sign of Gordon Brown's desperate desire to disentangle his government from the Iraq imbroglio. The decision however has been strobgly criticized by American. American officials have charged that the British have "lost the south,” but British has brushed off the charges as "unfair" American criticism.

According to the critics, it has been an inglorious retreat and resulted in the danger that Basra and its inhabitants have been left to the mercy of murderous Shia militias.

However, the British officials have been reiterating that they have handed over the base to the Iraqi authorities who are now capable of providing security for their own people.

The future of Basra people hangs in uncertainity. Hassan Ibrahim, a 48-year-old teacher, said: "There was criticism of the British because people felt they did not do enough to stop the criminals, some of whom are even in the police. But a lot of people also say that things could get much worse if they leave. One thing we are uneasy about are rumours that the Americans may come to Basra to replace the British. We see what is happening in Baghdad and we don't want that here."