Brett Lee is fighting a lost cause, says Roebuck 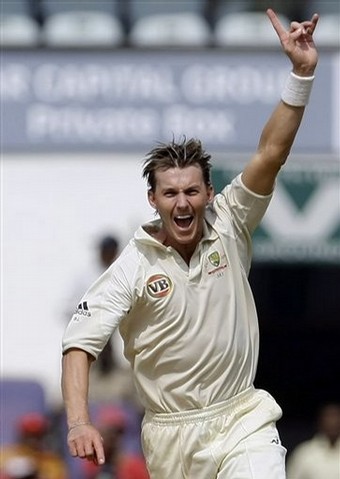 Sydney, Mar. 17: Australian fast bowler Brett Lee may be taking all the required steps to get in shape for the forthcoming Ashes series against England, but according to cricket columnist Peter Roebuck, he is fighting a lost cause, given the extraordinary performances of the current crop of bowlers doing duty in South Africa.

“It is hard to see him playing any part in the 2009 Ashes and he will be 33 in November, a combination that does not bode well for a wholehearted cricketer deserving of a better fate. Lee has crossed a fine, unseen line and, as a rule, there is no going back,” says Roebuck in an article for the Sydney Morning Herald.

Though he has over 300 Test wickets, Lee has not bowled a ball at full pelt for several months, arguably for an entire year.

“Not only has he fallen back, another generation has risen - so the desperation to restore Australia''s only experienced pace bowler has diminished,” Roebuck feels.

“Lee has always been the most physical of bowlers. Everything in his game is linked to supreme fitness. Whereas others can reduce their pace and rely on cut and control, he flows to the crease like a thoroughbred down the straight, a perfect specimen in full flight. His delivery is a product of his athleticism; his pace is generated by his run-up and flexibility,” he adds.

Roebuck predicts that when the end comes, it can and will be sudden and decisive.

He cites Jason Gillespie and Matthew Hayden as recent cases to prove his point.

Before the Ashes series in 2005, Gillespie was regarded as a top-class pace bowler undergoing a slight and slow decline. Like Michael Kasprowicz, he had shortened his run-up by way of prolonging his career and directing his energies and, for a time, the tactic worked. In the end, he went to England in 2005 and hardly troubled the batsmen in the series.

Through the air he had lost next to nothing, but the sting had gone off the pitch.

Every ageing bowler knows the feeling. The wrench, the hurl, the effort are the same at the bowler''s end, but nothing much happens 22 yards away. The ball refuses to spin or bounce, or else does so whilst imitating a rice pudding.

Gillespie never made it back. He continued to bowl skilfully for South Australia and for his ICL franchise, and even in county cricket. But the spark had gone; the indefinable something that put him among the best of his time. And it does not come back.

Matthew Hayden was still a champion in 2007-08. Then he suffered an injury, missed six months'' cricket and never recovered his form.

Although his position has been complicated by personal and health issues, Lee may well be undergoing the same final eclipse.

Ricky Ponting did not want to take him to India owing to his emotional frailties. Simply, a concerned captain did not think he was ready to commit body and soul to a demanding Test tour.

The selectors felt that Lee was their only seasoned seamer, and therefore, took the punt.

He arrived looking skinny and his lack of strength and stamina showed in his bowling. He tried his hardest, but his heart had been hurt. Although he was not alone, he brought too many problems with him into the rooms and on to the field.

Lee failed with the ball on his last Ashes trip in 2005, taking 20 wickets at 41.10 in the five Tests. Indeed he has never succeeded in England. Presumably the pitches are not firm enough for his purposes. (ANI)