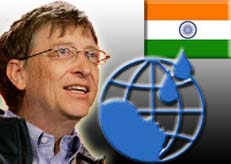 The senior members of the foundation met the Health Minister individually as well as in a Polio Round Table meeting.

During the meeting wide ranging issues from the health sector were discussed. Gates was apprised of strides made in key areas of Polio, National Rural Health Mission, Aids Control and Anti-tobacco efforts.

In the Polio Round Table, new initiatives taken by the Government for complete eradication of polio from the country were discussed.

Describing the polio programme of the Nation as a biggest health programme anywhere in the world which covers about 172 million children in one round, the Health Minister said that the initiative has consistently accounted for more Government funds in the annual budget than any other communicable disease programme.

The discussion also focussed on high risk regions and population at risk and intensified efforts to deal with the situation.

During the meeting Gates thanked the Government of India for making polio eradication a top priority. He congratulated work done in partnership with the Global Polio Eradication Initiative (including World Health Organisation (WHO), United Nations Children''s Fund (UNICEF) ROTARY and CDC.) He expressed confidence that with additional tools to enhance current efforts, polio can be successfully eradicated in India.

Apart from Dr. Ramadoss and Bill Gates, the Polio Round Table was attended by senior officers of the Union Health Ministry and Planning Commission, senior members of the Gates Foundation, WHO, UNICEF and Rotary International. (ANI)