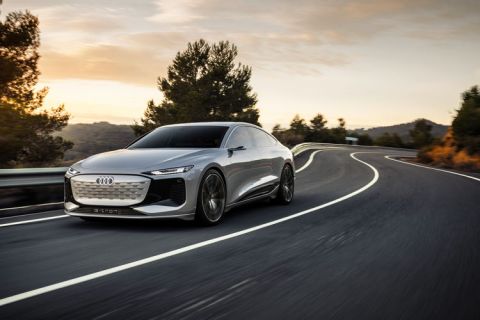 German automobile manufacturer Audi AG has just introduced the world to the future of its electric sedans with the A6 e-tron concept electric vehicle (EV), which was unveiled at the ongoing Shanghai auto show. The Audi A6 e-tron concept comes equipped with all those impressive specs that one can expect from a premium electric vehicle. It is based on the company’s new “Premium Platform Electric (PPE)” platform, which has been developed by Audi in partnership with Porsche. The luxury carmaker has plans to use PPE to produce several new EVs, the first of which is expected to hit the road in late 2022.

The PPE platform will port a 100kWh battery, capable of charging at up to 270kW on an 800 volt charger. According to Audi, its 350kW (469hp) motor will be powerful enough to offer an acceleration of 0 to 100 km/h (0-62mph) in less than 4 seconds. The manufacturer also claims that the new concept sedan has an aerodynamic drag coefficient of merely .22, which makes it one of the EVs with the least-drag available.

As far as range in concerned, the battery is good enough to offer a range of 700 km (435 miles) on the WLTP cycle. On the EPA cycle, it translates to around 390-400 miles. However, the final efficiency numbers yet to be released. In terms of exterior size, the A6 e-tron is roughly the same as the rest of the A6/A7 series. These features will surely put the electric sedan in line with the most-efficient EVs available.

The manufacturer said in a statement, “The PPE platform leverages the benefits of electric drive in a familiar configuration – a large battery, low to the floor of the vehicle, placed between the axles. As we’ve seen in many other vehicles, this allows for a lower center of gravity and better chassis rigidity, improving handling.”

The new concept incorporates a number of other high-tech features, including the luxury car brand’s Digital Matrix LED headlights, which allow the headlights to project images on the road ahead. Audi engineers have even programmed a game for this concept. One can play the game by projecting it onto a wall and control it with a smartphone.

The A6 e-tron concept is just the first EV from the German carmaker to use the new PPE platform, and the luxury car brand has plans to offer PPE platform-based vehicles globally. Its sister brand Porsche will also use it, with its first PPE model being the new all-electric Macan.