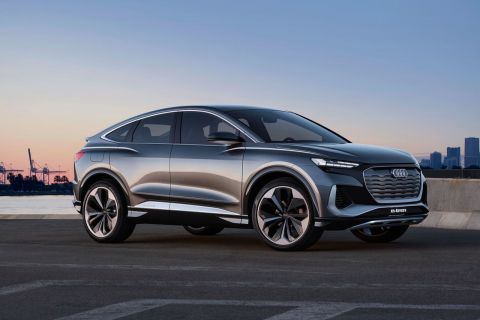 German automobile manufacturer Audi has confirmed that the highly anticipated Q4 e-tron compact electric SUV has entered the production lines at its Zwickau manufacturing plant. As the name suggests, the Q4 e-tron will be sized between the Q3 and Q5 compact SUVs, has entered production at the Zwickau factory alongside the VW ID.4, which shares the MEB platform with the new SUV. MEB stands for Modularer E-Antriebs-Baukasten, which means modular electric-drive toolkit. It has been developed by the Volkswagen Group, and is being used in models of Audi, Skoda, VW and some other brands.

The MEB is a highly versatile and variable platform suitable for various fully electric models and it offers significant scope for leveraging synergies.

Peter Kössler, a board member for Production & Logistics at Audi, said the luxury car brand’s collaboration in Zwickau demonstrates the enormous synergy potential that it enjoys with the Volkswagen Group. He added that the on-schedule start of production of the electric SUV is testament to their outstanding teamwork.

The Q4 e-tron, which is expected to hit European roads sometime this summer, which will be Audi’s fifth electric model to be rolled out of the assembly line. However, the all-electric compact SUV is going to be the first e-SUV to be produced by the luxury brand in Germany.

Announcing the start of electric SUV’s production, Audi shared some pictures of the production line, and revealed that nearly 1,400 employees were engaged in the producing the upcoming SUV.

Volkswagen Saxony Executive Management’s Dr. Stefan Loth added that the collaborative effort has transformed the Volkswagen plant in Zwickau into a multi-brand plant.

Speaking on the topic, Dr. Loth said, “With the start of production of the Audi Q4 e-tron, the Volkswagen plant in Zwickau is now a multi-brand plant. As a result, we are writing yet another chapter in the long history of the automotive industry here in Saxony. I’d like to thank all the Audi employees.”

The all-electric Q4 e-tron SUV will come equipped with an 82-kWh battery sitting between the axles, offering a range of up to 280 miles on a single charge. Acceleration from zero to 60 miles per hour (mph) will take 6.3 seconds. Top speed has been rated at 200km/h. It will compete head to head with EV pioneer Tesla Inc.’s upcoming Model Y crossover. Pricing and other details are yet to be released.