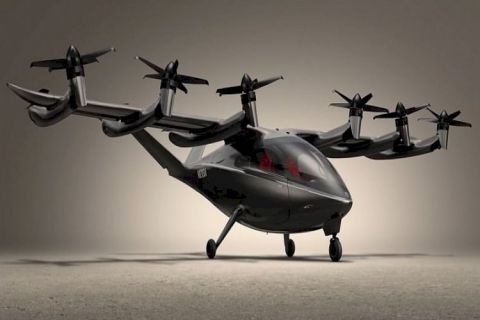 Archer Aviation Incorporated, a startup backed by United Airlines Holdings Inc, has unveiled its future electric aircraft (electric flying taxi) that will one day carry people to and from streets, thanks to its ability to take off vertically like a helicopter and fly like a plane. The all-electric vertical takeoff & landing aircraft (eVTOL), under brand name Maker, unveiled staged at a hangar using XR technology to simulate a ride. According to Archer’s claims, the electric taxi can travel up to 60 miles at a top speed of 150 mph.

The unveiling of the electric taxi took place at a glitzy event in Hawthorne, California, roughly at a distance of five miles from Los Angeles International Airport. The startup has plans to initially operate in Miami.

The official unveiling of the electric taxi followed media reports of two separate deals involving eVTOL aircraft companies based in Britain and Brazil. Airlines and other companies see a great business potential in eVTOLs as these vehicles will help ease traffic congestion by moving commuters in small electric air taxis without polluting the environment.

As mentioned above, Archer is backed by United Airlines, which has invested $20 million in the startup. It announced in February that it has plans to merge with a special purpose acquisition company (SPAC) overseen by investment banker Ken Moelis sometime later this year. That deal would value the startup at $3.8 billion. United Airlines will also acquire as many as 200 electric taxis from Archer if the aircraft meets its performance & operational needs.

Archer co-founder & co-chief executive officer Brett Adcock informed, “Our real goal is to make a mass market transportation solution in and around cities. The taxis can fly at 150 miles per hour (240 km per hour) for distances up to 60 miles (100km) at an entry level price between $3 and $4 per passenger mile.”

Currently, Archer is in the process of getting the piloted four-passenger electric aircraft certified with the Federal Aviation Administration (FAA). The Palo Alto, California-based electric taxi startup aims to commercially launch “Maker” sometime in 2024, initially in Los Angeles and Miami.