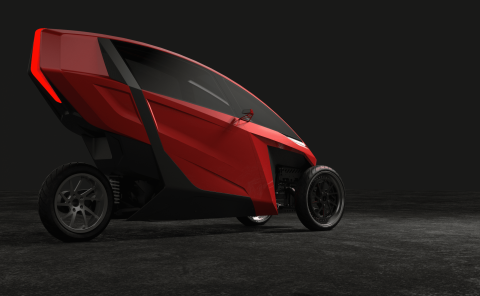 Lithuania-based new electric motorcycle manufacturer AKO has started taking reservations for its innovative leaning electric trike that offers a blend of high power and unprecedented sporty handling characteristics. The AKO Trike has been in development for the last five years, and it was introduced to the world around a year ago. Its ability to lean on corners, impressive range on single charge and top speed enables it outshine even some of full-size electric cars available on the market.

Describe as “spaceship on wheels,” the AKO trike has been designed to act as a sporty electric motorcycle while also providing the enclosed benefits of an electric car. Seating for two makes it possible to share the smooth ride and fun while increasing the EV’s utility.

Discussing the startup’s goal behind producing the trike, Cofounder & CEO Jurgis Lecas said they wanted to introduce a vehicle capable of filling the gap between cars and motorcycles perfectly as sustainability was no longer about being electric only.

Speaking on the topic, Lecas said, “Sustainability is not about being electric only anymore. Besides the exceptional design and high-end technical solutions, we’re introducing a vehicle that fills the gap between cars and motorcycles perfectly.”

However, Lecas admitted that the electric trike might not be a complete problem solver for all and sundry. While it would prove to be a great car alternative for some; for others, it would be something outstanding.

The AKO Trike makes the rider feel like a spaceship on wheels as it is quite fast. Accordin gto the startup’s claims, the 140-kW motor of the trike is capable enough to deliver a top speed of 240 km/h (roughly 149 mph). But, as the top speed will be limited in many European countries, its top torque would be at around 600-700 Nm (442-516 lb-ft).

Weighing 450 kg (992 pounds) and coming equipped with a 26kWh battery, it will deliver an estimated range of 300 km (roughly 186 miles). Based on these specs and speed, the AKO Trike is expected to qualify as an L5e vehicle. It means that a driver’s license will be needed to operate it.

Marching closer to the electric trike’s production, AKO has started taking reservations with deposits of just €100 (roughly US$121). Given the EV’s target price of €24,000 (roughly US$29,000), the fully refundable deposit is comparative peanuts. Nevertheless, depositing the small amount to reserve a trike will be a great way to show support the EV startup.