100 New Airports Will Boost Tourism and Hospitality Sector in India 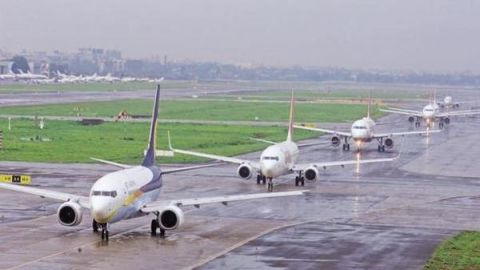 Indian government has announced many ambitious projects over the last five years. While many of those projects are moving slow, another plan for 100 new airports across India is expected to take off in coming five years. This will provide the much needed boost to tourism sector in India. Even local tourists will be using airlines more often for traveling across India. A report by ANAROCK follows....

The last decade told a tale of mixed fortunes for Indian aviation, with many highs and lows. The number of operational airports increased from 82 in 2010 to 103 in 2019, while passenger traffic almost trebled from 123 million passengers in FY10 to 344.7 million in FY19. However, the decade also witnessed the closure of two of the country’s largest airlines.

Always a bellwether of a country’s growth and development, the aviation sector plays a vital role in promoting its economy. As the only rapid worldwide transportation network, aviation is a key factor in the growth of tourism, business and hospitality. As India gears up for the significant expansion under the UDAN scheme by FY24, the growth of aviation and its associated infrastructure plays will push the tourism and hospitality sectors - especially in smaller cities.

Currently, the Airports Authority of India (AAI) manages 125 airports in the country, including 17 international airports. With airports in major cities such as Mumbai, Delhi and Bengaluru running to full capacity, there is a dire need for new airports. In the Union Budget 2020-21, the FM announced 100 new airports by FY2024 under the UDAN scheme. As per the Economic Survey, 16 private greenfield airports, 15 AAI airports, 31 heliports and 12 water dromes will be developed, and 46 idle airstrips will be revived.

To ease the pressure on existing major airports, new ones will be developed under the Regional Air Connectivity Scheme (RCS) - which focuses on facilitating regional connectivity - by providing financial support and infrastructure development. As per the UDAN program, airlines bid to win subsidies for operating flights linking big airports with smaller ones.

The Finance Minister has also proposed launching a separate Krishi UDAN scheme, which will improve connectivity with the country’s northeast region. Under the PRASAD scheme launched in 2015, the government has already identified and developed pilgrimage sites across the country to boost religious tourism.

Hospitality in Tier 2 & 3 Cities to Get a Boost

These airports will place smaller destinations on the tourism map. In fact, with the increasing focus on unique experiential travel and stays, smaller boutique hotels and resorts in off-beat locations are the Next Big Thing for Indian hospitality. Also, with airports providing improved connectivity, more start-ups and IT-ITeS companies will crop up and expand in these smaller cities.

This factor will also increase the demand for quality hotels in such centres where the USPs are lower land cost and better affordability than in the top cities. We will see a lot of renewed interest from domestic and even international hospitality brands.

As has been evidenced in other parts of the world, the development of aviation was a veritable game-changer for tourism and hospitality of many world cities. Dubai is a notable example - it has become a major transit hub for those travelling between Europe, Africa, North and South America and Asia.

Dubai International Airport is one of the busiest facilities in the world and reached the major milestone of having served 1 billion passengers by the end of 2018. Not surprisingly, its airport's emergence as a preferred transit hub for millions of travellers has induced phenomenal growth in Dubai's hospitality sector.

The transformation is indeed remarkable. In the early 1990s, Dubai had only a handful of hotels available for tourists; today, the city hosts every major hospitality brand and has more than 95,000 rooms. With such a strategic approach, aviation-enabled cities can result in extended stays by transit travellers, thereby becoming major tourism hubs in their own right.

Ready to Take Off?

According to the Ministry of Tourism, around 3,77,092 tourists arrived on e-tourist visas in India in December 2019, registering an annual growth of 22.3%. The Economic Survey also cited that despite a major airline suspending operations in April, airlines operators have successfully filled the void and scaled up their passenger and air cargo capacity.

Developing 100 new airports over the next five years is an ambitious target and the government must ensure that the existing aviation infrastructure is functional. Over 400 airports and airstrips were identified for the UDAN scheme in 2016, but less than 50 are currently operational.

This shortfall resulted in low target achievement for airlines that were awarded UDAN routes but could not start services on time. Before the next round of airport development takes off, the government must evaluate the performance of airlines and routes under the Regional Connectivity Scheme to ensure the future viability of the new airports.