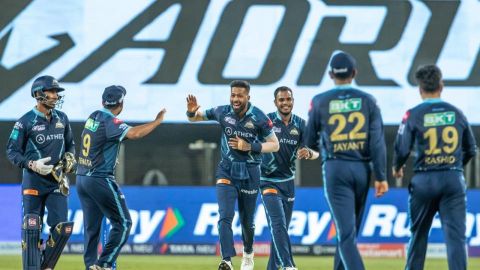 After the Mega Auction of IPL 2022 was over, very few cricket experts had expectations from the Gujarat Titans team, led by Hardik Pandya. In fact, most believed that this was among the weakest teams. And to make things worse, the player who was supposed to have opened for Gujarat Titans along with Gill, Jason Roy, pulled out of the tournament.

So naturally, many questions were left unanswered - who will then open along with Gill? Who will be the batsman in the third and fourth position? Will Hardik Pandya turn to bowl?

However, halfway into the IPL tournament and the Gujarat Titans have splendidly answered all of these questions, and now they are among the top favorites who have a fair chance at lifting this year’s IPL trophy.

A stellar performance by Captain Pandya

Hardik Pandya has always proven himself to be a worthy all-rounder. He has not only been the captain of his team, but also the life of the Gujarat Titans. Pandya has been stellar in batting at the fourth position now at the third. But his performance extends beyond his batting – he has also been superb at opening the bowling line, accomplishing run-outs along with fulfilling his role as captain of the team. Pandya is among the top run-scorers of this season, with a total of 305 runs at an average of 61.

Amazing performers who pitched in at the right time

Gujarat Titans have been lucky, always having some player to show up and pull through the team in times of trouble. Be it Rashid Khan against the Sunrisers Hyderabad, Tewatiya against Punjab Kings, Miller against Chennai Super Kings, or Saha against Sunrisers Hyderabad, there have always been some mind-blowing performers on every occasion. These players have shown nerves of steel that kept the others in the team going through challenges.

The Gujarat Titans have the most attacking bowling line-up. And according to experts, Hardik Pandya's Gujarat Titans undoubtedly have the best bowling lineup among all other teams, in this IPL 2022. Pioneered by the amazing Rashid Khan, Lockie Ferguson, and Shami and with other names for support like Yash Dayal and Alzarri Joseph, they have the right performers to block opponents and defend low scores. The biggest example was set when the Gujarat Titans valiantly defended a meager total score of just 157 against a lineup of batsmen as stellar as that of the Kolkata Knight Riders.

Given their firepower in terms of batting and bowling and fielding units, Gujarat Titans will be a force to reckon with this season, observes Kevin Pietersen, the former captain of Team England.

“It feels right that the two teams definitely through to the play-offs are Gujarat Titans and Lucknow Super Giants. I’ve been very impressed by both. The fact that they are new franchises means that they have approached this competition with no fear and a fresh slate, which has worked for them,” Pietersen said in his column on Betway.

They are consistently figuring out ways to win against all odds. In fact, he has also said that Gujarat Titans' performance reminds him of the fiery Rajasthan Royals during IPL 2008. Although they did not manage to start at the top of the table, Gujarat Titans look every bit charged up to win IPL 2022.