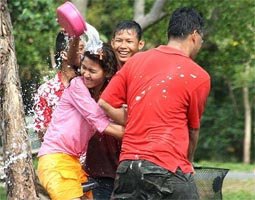 Frankfurt, Germany  - Thais celebrate New Year in April with the Songkran Festival, which starts as a major spring cleaning before regularly escalating into good-natured water fights.

The festival is traditionally marked by cleaning one's house, Thailand's tourism authority said in Frankfurt. At the same time, the superiors of Buddhist monasteries bathe the Buddha images in the temples. Over the years, these ritual washings came to include Thais dousing each other with water.

According to the tourism authority, the Songkran Festival is celebrated in a particularly traditional way in Chiang Mai, where part of the New Year's procession proceeds by raft over the Ping River.

Another major Thai festival is Loi Krathong on November 2. On this festival of lights, Thais throughout the country launch small vessels, called krathongs, on rivers, lakes and ponds, the tourism authority said. Illuminated with candles, the vessels are filled with flowers, joss sticks and other offerings meant to pay respects to the goddess of water. (dpa)