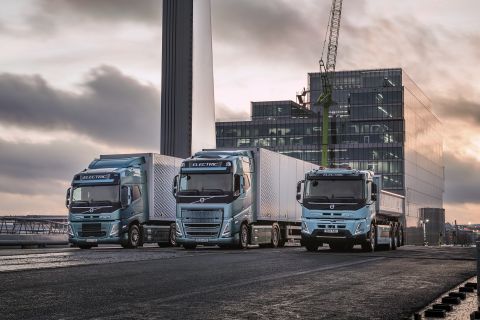 Volvo Trucks Corporation, a global truck manufacturer headquartered in the Gothenburg area of Sweden, has announced the commencement of sales of its three-strong lineup of electric trucks: the FH, FM and FMX.

The FH Electric and FM Electric are aid to be versatile electric trucks for performing local/short hauling duties. The more capable FMX Electric is primarily aimed at the construction industry, but it can be used for a wider range of purposes.

The company has already started accepting orders for its electric trucks, several months before their official availability. According to the company’s claims, it has had more than 1,100 inquiries from nearly two dozen countries, including several letters of intent to purchase the commercial EVs.

Roger Alm, President of Volvo Trucks Corp., described the upcoming commercial EVs as “fantastic trucks,” and stressed that the company has moved a major step forward in the direction of electrification.

The FH, FM and FMX aren’t the first electric trucks from the world-renowned Swedish brand. The very first electric trucks were the 16-ton FL Electric and 27-ton FE Electric that were introduced in the year of 2019 as commercial vehicles for local distribution, garbage collection, as well as to serve as urban transport solutions. Equipped with a battery pack of between 100 kWh and 300 kWh, the lighter FL can deliver a range (WLTP) of 186 miles (300 km) per full charge, while the heavier FE delivers a range of just 124 miles (200 km).

In December 2020, Volvo launched the VNR Electric model that was built in the United States for the fast-growing EV market of North America. It is available in a number of configurations. After being rolled out initially with a 264-kWh battery pack, the manufacturer subsequently equipped it with bigger 375 and 565-kWh battery packs, increasing the claimed range from 150 to 230 miles per full charge. With the addition of the FH, FM and FMX, the lineup of Volvo’s electric trucks has expanded to a total of six commercial haulers.