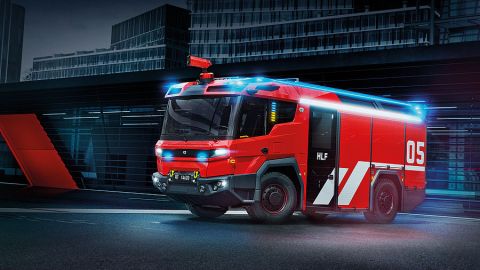 The electric fire truck uses a dual-motor all-wheel-drive (AWD) system and also comes equipped with a six-cylinder diesel engine to ensure continuation of the task in case its 50-kWh or 100-kWh battery pack runs out of power.

Unlike many other EVs produced by the Swedish manufacturer that come equipped with two or sometimes three electric motors, the RT has four electric motors to perform its task. All the four electric motors have to run simultaneously. Two of them run for propulsion, one for the range extender to deliver additional battery power, and one for electric power takeoff. A team of Volvo Penta engineers worked tirelessly to create this completely cutting edge system.

The electric fire truck’s innovative Active Cooling Unit (ACU) has been developed by Volvo Penta in collaboration with Rosenbauer Group -- one of the world’s three leading manufacturers of fire-service vehicles.

Describing the ACU, the manufacturer said, “The new ACU draws on a 600V system – instead of the conventional 24V – this extra power allows Volvo Penta to not only cool the batteries but also offer cooling capacity to the Rosenbauer vehicle. Volvo Penta has optimized the design and adapted the complete electric driveline system for a specific vehicle.”

The list of Rosenbauer RT specs includes a 50-kWh battery pack with the option to upgrade it to 100-kWh, dual motor AWD (one electric motor per axle, with two-speed gearbox each), system output has been pegged at 360 kW (490 HP) with 50,000 Nm of torque for all wheels. Its six-cylinder diesel engine delivers 200 kW (272 HP). In case of 100-kWh version, DC fast charging takes just 1 hour to replenish its massive battery pack up to 80 per cent.

A few units of the RT have already entered pilot service in some parts of the world, including Amsterdam, Berlin and Dubai. It will be very interesting to see how well these electric fire trucks will cope in the real world as these vehicles have to perform much tougher tasks than ordinary electric trucks.