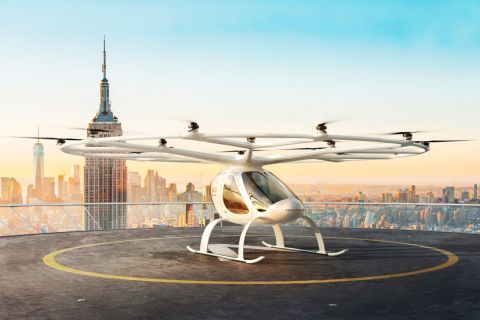 Volocopter, a German urban air mobility (UAM) developer with specialization in the design of electric helicopters or personal air vehicles, has revealed plans to bring its electric vertical take-off & landing aircraft (eVTOL) urban air mobility to US market, starting with the city of Los Angeles.

In order to explore the potential of bringing eVTOL solutions to the Los Angeles area, Volocopter has signed a commercial partnership deal with Urban Movement Labs (UML). The deal marks the German UAM developer’s first step in bringing its innovative eVTOL and VoloCity air taxi technologies to the U.S.

With a team of more than four hundred employees, Daimler-backed Volocopter is operating in three separate cities. It has three test & development sites. In addition to Bruchsal, Germany the company operates in Munich and Singapore. In Munich, it is developing the VoloDrone for transporting heavy cargo and the VoloConnect for offering longer electric flights in the future. In Singapore, it is developing and testing the VoloPort prototype -- the world’s first of its kind air taxi designed to offer an exceptional passenger experience.

With the latest announcement, the German UAM developer hopes to bring its eVTOL technology to the U.S. sooner than later, starting with a marketing campaign this fall. First announced in November 2019, the UML is a public-private partnership that works with the Los Angeles Department of Transportation (DoT) to advance the city's electrification plans. Some other eVTOL aircraft developers, such as Hyundai and Archer, are also involved in the project.

Volocopter Chief Commercial Officer (CCO) Christian Bauer said in a statement that the German developer’s partnership with UML would serve as a great entryway for its innovative UAM services into the U.S. market.

Announcing the partnership, Bauer added, “Volocopter can strategically identify and address how our services can benefit cities in the country. More importantly, we are also gaining real insights into living transportation ecosystems in the U.S. to build the best complementary service to other modes of transportation for our future passengers.”

Bruchsal, Germany-headquartered Volocopter has plans to launch its air personal taxi services in a number of cities around the world, including London, Paris and Singapore. In the U.S., it has identified Los Angeles, San Francisco, New York, and Washington D.C. as possible early-adopter locations. The U.S. Federal Aviation Administration (FAA) has already accepted its application to concurrently validate the EASA-type certification for its all-electric personal air taxis.