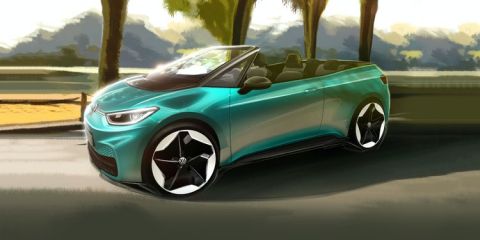 German automobile giant Volkswagen (VW) recently teased an all-electric convertible version of its ID.3 model, which would offer a unique blend electric driving and an open roof. While a number of electric convertibles are already available on the market, it would be just outstanding if VW transforms the idea of an all-electric ID.3 Cabriolet into a reality. However, the German automaker hasn’t made it clear whether it is really interested in producing what it has teases in the form of an all-electric ID.3 Cabriolet.

The all-electric concept car teased by VW features drop-top fabric roof, and near-identical design to hatchback; but it will get a convertible ‘Cabriolet’ version only if a new design study makes it feasible. It would about the size of Golf, and would likely offer a strong alternative to the Nissan Leaf and Hyundai Kona Electric.

A potential VW ID3 Cabriolet has been teased by the German automobile giant as a colorful illustration. While it is not a perfect representation of what the production version of all-electric ID.3 Cabriolet would look like, the images shared by the company showed that it would have a boxy face with a grille-width LED light bar.

At the back, there is a set of thin brake lights on rear end that is almost entirely without any major features or design elements. The roof is also missing, which suggests that the all-electric ID.3 Cabriolet would feature a collapsible fabric piece, like that of the Volkswagen T-Roc Cabriolet.

In terms of batteries and motors, the Volkswagen ID3 Cabriolet will be quite impressive as it would sport the same 58kWh battery as the hatchback, if it really enters the production line sometime in the future. However, its maximum range of 263 miles on a single charge would be a hard feat to match because the extra weight from a convertible body style would consume more energy.

In terms of interior, it would likely look nearly identical to the interior of the company’s standard hatchback. It means, the all-electric ID.3 Cabriolet would mean feature a digital driver’s display and a large touchscreen infotainment system among key interiors.

Nothing has been revealed about the release date or pricing of the teased EV, but it should not be expected anytime soon. For pricing, one should be ready to fork out above £30,000, if it comes into existence sometime in the future.