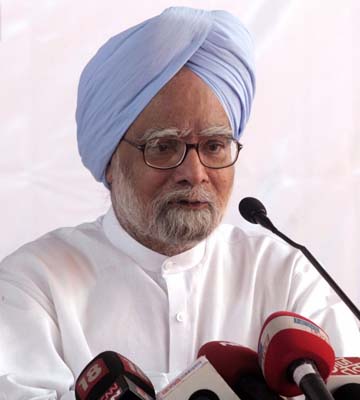 Latur (Maharashtra), Apr 21: Prime Minister Manmohan Singh on Tuesday assured that the United Progressive Alliance (UPA) government is dedicated towards the fight against terrorism and the repetition of the Mumbai-style terror attacks would be prevented at all costs.

Addressing his first election rally in Maharashtra, Singh said, "We want to avoid recurrence of 26/11 type attack at any cost... we also want that no religion or community is subjected to unnecessary harassment on the issue."

He claimed that the Congress is taking steps to strengthen and modernise the intelligence agencies and security agencies.

Brushing aside the Bharatiya Janata Party''s (BJP) promises to provide a strong government at the centre, Singh said, "The country cannot be run merely by making tall claims".

Criticising the NDA government for failure in handling attacks on the Red Fort and the Parliament during its regime, he said, "Some parties are claiming that they would provide a strong government but these claims are hollow."

Attacking the opposition on the 1999 Kandahar plane hijack episode, Singh said, "During the NDA regime, their foreign minister
(Jaswant Singh) himself escorted dreaded terrorists to Kandahar."

Singh asked the people to vote for the Congress on the basis of his government''s performance.

Pointing out the achievements of the UPA in the last five years, he said that the government has recognised the districts in the country where the population of minorities was significant and has undertaken measures for social and economic development of minorities.

He also claimed that the vacant posts under the Scheduled Castes recruitment quota were being filled up.

Asserting that the Congress has lived up to its expectations of fulfilling the needs of the common man, he said that the track record of the Congress in running the government has been appreciable. (ANI)