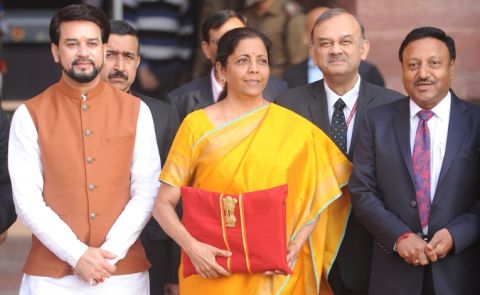 Union budget 2020 hasn't offered the much-needed support to many sectors but the budget is forward looking, long term plan for better India. The finance minister also indicated the harassment of taxpayers will be reduced and also offered an option for people to clear pending litigation by paying the due taxes.

Comments on Union Budget from different companies and leadership follow..

Acknowledging the influence of technology in shaping new age economy is a distinct aspect of the Union budget. Focus on artificial intelligence and targets set for quantum computing is a step in the right direction to strengthen India’s position as a frontrunner in exponential technologies. From IT services perspective, it will be interesting to see if setting up more export hubs is encouraged by incentives for the industry that has been at the forefront of exports for the country.

"The budget is a combination of continuation of the initiatives, prioritization and incentivisation of key focus areas and a set of new experiments. The social security enhancements like increase in deposit insurance cover and additional tax holiday for affordable housing are welcome steps. The optional feat, simplified personal tax slabs is expected to de-clutter tax administration. A number of investment friendly steps like data center parks and infrastructure for rural areas too have been initiated."

The Budget speech turned out to be no different from the previous years. The longest speech ever, the finance minister spent majority of the time describing the achievements of the government in the past and refused to acknowledge even once that the Indian Economy is facing a serious slowdown. There was widespread expectations that the budget would reduce personal Income tax in order to boost consumption. However, while the minister tinkered with the slab rates, she also qualified the reduction by removing all tax exemptions. To complicate further, now the individual can choose to pay taxes based on ‘Old rates with exemptions’ or ‘new rates without exemptions’. The outcome is that except gimmickry and confusion, the new changes are hardly going to move the needle of consumption.

The only large and surprising measure in the budget was the partial disinvestment of LIC, the crown jewel of the government. This can lead to substantial money to the government and may also facilitate more transparency in one of the most opaque financial institutions of the country. Another significant measure is 100% tax exemption for sovereign wealth funds on their infrastructure investments. This should help in bringing more FDI in the long term in the infrastructure space. The new Direct Taxes complicate the situation more than they resolved and `would contribute a little surplus in the hands of the people. The DDT would provide additional relief to corporates but would be negative for the individuals as they would be subjected to nominal tax rate as applicable. So basically any hope that the budget would have in assisting the economic revival has been dashed out temporarily.

Indian Bank is a pioneer in SHG funding. We welcome the move of launching village storage schemes to be run by women. Indian Bank will encourage the women by providing adequate training through our INDSETIs and fund them. The restructuring of MSME accounts first introduced by RBI on 1st January 2019 for MSME with loans up to Rs.25 Cr. This initiative has helped many MSME units to tide over the stress faced in their manufacturing activities. Indian Bank has restructured around 40000 accounts amounting to about Rs.1700 Cr for the period up to December 2019. It is further expected that around 500 accounts to the tune of Rs. 300Cr will become eligible for restructuring under the MSME restructuring scheme before March 31,2020

Other positives from the budget

Infrastructural push measures for MSMEs. Adequate measures for the encouragement of MSME sector. Doubling of Agricultural income with various initiatives by 2022. Solar energy measures have been announced. Tax benefits for Amalgamated Banks