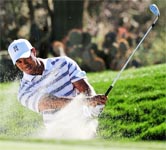 Even one moment of magic - a hole-out from the bunker on the 14th - couldn''t swing the momentum.

Woods made more mistakes down the stretch and couldn''t match the South African''s six birdies in 16 holes.

"I''ve played with Tiger a few times. You either let it get the best of you or you thrive on it," said Clark.

"I knew I had to play out of my mind to beat him. I didn''t miss many shots," he added.

Woods, who said he had "zero" pain all week, would not admit his play was poor. That much hasn''t changed since the surgery.

"Well I lost," said Woods, who was 1-under par with three bogeys over 16 holes.

"I played really well today. I just didn''t make enough birdies. Tim did that today, and I just didn''t answer him with mine. I hit two bad shots in two days," he added.

First-round opponent Brendan Jones was out of his element, but Woods knew Clark as a consistent grinder who wasn''t going to make mistakes.