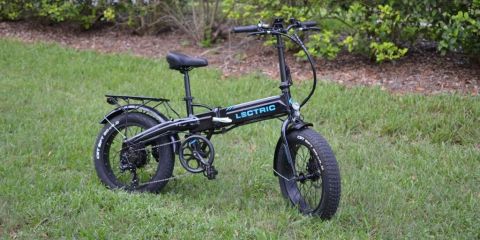 Phoenix, Arizona-headquartered Lectric eBikes recently took wraps off a new version of its widely-acclaimed folding fat-tire electric-bicycle (e-bike), dubbed the Lectric XP 2.0. The original version of the Lectric XP garnered acclaim from industry experts as well as customers, thanks to the e-bike’s impressive performance at low price tag of $899.

However, there were still several upgrades that some riders wanted the company to bring to the e-bike. The recently unveiled Lectric XP 2.0 comes with those desired key upgrades.

The long list of key upgrades made to the Lectric XP 2.0 e-bike to increase its performance while ensuring more comfortable ride includes better suspension, higher cargo carrying capacity, enhanced handlebar ergonomics, and the like.

The first major upgrade made to the e-bike is its new adjustable suspension fork that features hydraulic damping. While it is not the longest travel fork available on the market, it is certainly a big enhancement over a lack of suspension. According to the manufacturer’s claims, it offers true damping suspension as it is not just a bouncy spring.

When it comes to cargo capacity, the new version has become much better than the previous one. The manufacturer has upgraded the rear lighter-duty 50 lb-rated rack to a stronger 77-lb rack. In addition, there is mounting for the front as well as rear baskets. This upgrade has essentially turned the folding Lectric e-bike into a utility e-bike.

The 4-inch-fat tires of the previous version of the e-bike have been swapped for 3-inch tires. The new tires offer enhanced agility and responsiveness while offering a strong grip to the ground by maintaining a wide contact patch for ensuring comfortable riding on diverse terrain.

Lectric eBikes was not able to add all of the aforementioned upgrades to the e-bike for free. The new Lectric XP 2.0 comes with a price tag of $999, which represents a hike of $100 from the price of the previous version. However, considering all of those impressive upgrades, the increase in price seems more than reasonable.