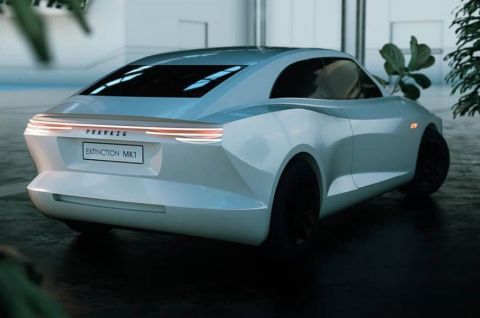 The environment-friendly Extinction MK1 electric car comes equipped with a 96 kHw battery pack that offers a specific energy of 155Wh per kg. It has the capacity to produce power of up to 200 hp to support a speed of 196 kilometers per hour (kmph). Top torque has been pegged at 2,400 Nm. It takes just 5.4 seconds to sprint from a speed of 0 to 100 kmph.

The Extinction Mk1 electric car is also impressive in terms of design. It looks futuristic, thanks to its sharp lines and a glossy bar design for the head as well as tail lights. Resembling a bit with the Lucid Air, the coupe-style electric car easily stands out in the crowd, even amongst the EVs that are already on sale in the country.

It is worth-mentioning here that Pravaig Dynamics is the first Indian EV manufacturer to claim a range of more than 500 km for a vehicle that has specifically designed to be initially used as a commercial vehicle. Volkswagen’s VW ID.3 ERV can hardly cover a distance of 500 km, even after several improvements. Tesla’s widely popular Model 3 electric car claims a range of 507 km in single charge, but it could become capable of achieving this range following a number of internal and external improvements. In India, the electric car with the highest range is Hyundai Kona EV, which can cover only 452 km on a single charge.

According to the manufacturer, the Extinction MK1 is oriented towards chauffeur-driven customers. While the company didn’t reveal images for the interiors, one can expect the EV to offer removable front passenger seats, a glass partition between the front and rear seats, a fold-able table tray, and multiple charging ports.

The two-door, four-seater Extinction MK1 electric car will primarily be used for commercial fleets on a subscription-based model. Pravaig Dynamics has plans to initially sell it in metropolitan cities like Bengaluru and Delhi, before the startup expands to other cities eventually.