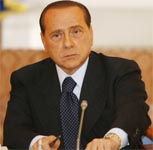 London, Apr 23 : Italian Prime Minister Silvio Berlusconi has brought some pretty girls with a background in showbusiness into his Cabinet to brighten up politics.

Berlusconi has chosen Angela Sozio, 36, a flame-haired former contestant of Grande Fratello, the Italian version of Big Brother, to be the new face for the European Parliament elections in June, reports The Times.

Sozio caught media glare two years ago when paparazzi photographed her and other showgirls strolling hand-in-hand with Berlusconi, 72, at Villa Certosa, his villa in Sardinia.

The photographs, which appeared in the mass circulation magazine Oggi, came under the headline "Berlusconi's Harem".

The pics showed some of the women sitting on the Prime Minister's knee.

Following the incident, the Italian premier insisted that he was being hospitable in showing the women round his seaside estate while his wife, the former actress Veronica Lario, was at her villa near Milan.

The future politicians also include Eleonora Gaggioli, an actress best known for her role in the popular television costume drama Elisa di Rivombosa; Camilla Ferranti, who appeared in Incantesimo, a soap opera set in a cosmetic surgery clinic, and Barbara Matera, who competed in the heats for the 2000 Miss Italy contest and went on to become an announcer on the state television channel Rai. (ANI)