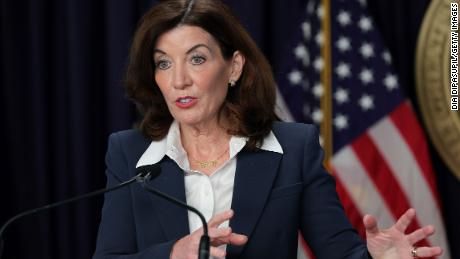 The New York state’s recently approved a$220 billion budget for the fiscal year of 2023 includes authorization of three casino licenses for the downstate region. Signing the budget bills into law, New York Governor Kathy Hochul confirmed that besides the three downstate casinos, the budget includes language to cover the state’s portion of the planned $1.4 billion stadium for the football team Buffalo Bills.

Hochul explained that proceeds from the state’s settlement with the Seneca Nation of Indians over its compact dispute would be used to cover the state’s share of $600 million in the stadium project.

As per the approved budget, the licensing fee for each of the aforementioned three casinos will be at least $500 million, and the initial licenses will be valid for a period of at least 10 years but not more than 30 years. The process of licensing the final three commercial casinos will start sooner than later. The casinos will be constructed either in New York City (NYC) or its surrounding suburbs, which includes north of the Big Apple and the Long Island.

State Sen. Joseph Addabbo, a Democrat from Queens, said that the three casino projects would provide a big boost to the local economies by generating new jobs for people and a new stream of tax revenue for the local government. The licensing fees and tax revenue will be used to support education and gambling addiction programs.

Speaking on the topic, Addabbo said, “By allowing three casinos in the downstate region to operate with full licenses, it will create thousands of jobs when considering construction and credible post-construction union jobs.”

There is a great possibility that two of the three casino licenses will go to existing video lottery terminal venues in the NYC area. Aqueduct Racetrack, Queens-based Resorts World New York City and MGM Resorts International’s Yonkers-based Empire City Casino are said to be in the front row to get licenses.

Resorts World President Bob DeSalvio said in a statement that his company was ready to take advantage of the big opportunity. He stressed that his company had invested more than $1 billion in the existing venue over the past decade.

Surprisingly, the Big Apple State’s spending plan for the next fiscal year doesn’t include additional mobile sports betting licenses, which means that the state will keep on offering only nine apps for the foreseeable future.