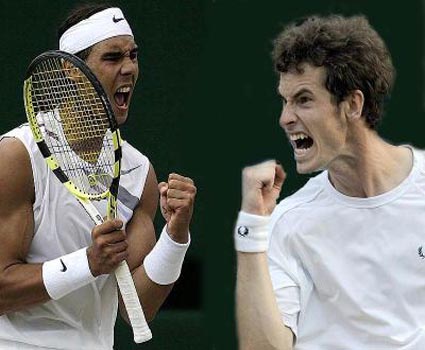 Indian Wells, California  - Andy Murray bids for his third title of the season after setting up a final with world number 1 Rafael Nadal at the Indian Wells Masters on Saturday.

Murray stunned error-prone second seed Roger Federer 6-3, 4-6, 6- 1, marking his fourth consecutive victory over the former dominator of the sport since losing to the Swiss in the US Open final six months ago.

Nadal got past eight aces from Andy Roddick - including three in the 11th game of the second set - to post a 6-4, 7-6 (7-4) victory. Murray and Nadal played the Rotterdam final last month, with the Scot adding that victory to one he took in January over the Spaniard in Doha. The Scot has won their last three meetings dating to the US Open semi-final.

"I've started to play better against Nadal lately," said number 3 Murray. "He's obviously one of the toughest players ever. I have to play some of my best tennis."

Nadal was never in danger against Roddick as the top seed struck 29 winners in windy conditions while breaking three times.

But the American staged a second-set comeback to break for 5-all, consolidating with his three-ace performance to 6-5. Nadal took it into a tiebreaker, where he produced a down-the-line winner for victory in just under two hours.

"I had to play well since Andy was going strong in the second set," said Nadal. "He's had a good start to the season.

"Against Murray it will be interesting, he's playing well and has had some good results this year."

Murray is hoping to reproduce the form that took him past Nadal in Rotterdam. "I've started to play better against him lately, but he's obviously one of the toughest players ever - I have to play some of my best tennis."

Federer admitted that his 46 unforced errors killed his chances against Murray.

"I had way too many errors today. In the first set, I struggled with the rhythm, the same thing in the third set.

"You're disappointed a bit, but it was a decent tournament - not the greatest of all time, but it was all right.

"I still had high hopes for today, so I have to look forward. Hopefully I'll play well in Miami (from Wednesday)."

Federer now stands a dismal 2-6 against Murray, who took a heavy tumble in the fourth game of the final set. Federer went to make sure his opponent was okay and then did not win another game in a contest that ended after one-and-three-quarter hours.

"I got a little bit scared at first," admitted Murray. "Once I got up and ran around after a couple points, I knew that it felt okay."

Murray improves to 20-2 in the season and feels he is now in control against Federer.

"I don't think I did anything incredible, but that wasn't what I was trying to do when I went in to play." (dpa)