Moldova's president follows Putin model: out and back in 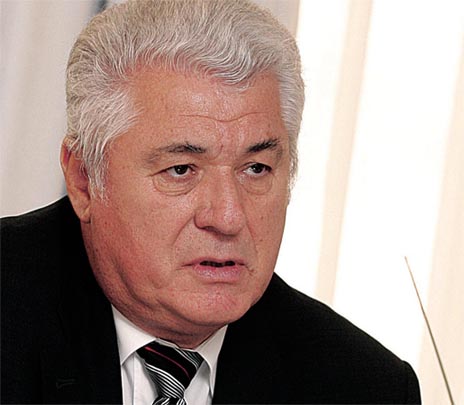 Chisinau  - Although Moldova President Vladimir Voronin is constitutionally obliged to quit his job after Moldova's April 5 elections, few expect him to stop calling the shots in the former Soviet republic, least of all Voronin himself.

Much like Vladimir Putin, Russia's former all-powerful President and current Prime Minister with little less influence, Voronin appears to be looking forwards to continued political dominance in his country.

The largest political party is fully behind him, and his promises of "continuity" and "stability" have been his prime appeal to voters.

"Taking into account the goals and tasks that we set for these eight years, I cannot stand aside," Voronin told Ekho Moskvy Radio.

A long-serving member of the Soviet Communist Party, Voronin founded Moldova's Communist Party in 1993, and in 2001 engineered a roughly democratic takeover of the reins of Moldova's government, after a Communist-controlled parliament elected him President.

Voronin's critics are most frequently members of the centre-right opposition, or extremist Moldovans wishing their country would dissolve and join either Romania or Russia.

They claim that Voronin took power in a constitutional coup, first by cancelling the popular election of a President, and then by ramming his candidacy through a Communist-packed legislature.

But Voronin, currently only one of two Communist politicians holding his country's top job, has argued that he is a man of the people, that he came to power by free and fair vote, and that he has since steered Europe's poorest nation through some of the worst problems confronting any elected politician on the continent.

Voronin's tactics with Moldova's prime security headache - the continued secession and armed independence of the ethnic Russian province Transnistria - have not resolved the problem.

However, over the past decade he has certainly been regarded as trying.

Since 2001, Voronin has offered Transnistria fully autonomous status, demanded it accept European Union peacekeepers, slapped a blockade on Transnistrian goods, and pitched Moldovan rejection of NATO to the Kremlin in exchange for Moscow pressure to bring Transnistria's leader Igor Smirnov to the negotiating table.

Voronin currently is tilting a shade towards the EU on Transnistria. In late March, he refused to meet with Smirnov, as Transnistrian border troops blocked the visit of EU observers to the province.

Voronin has been quick to take credit for Moldova's relatively peaceful domestic political scene, and in March declared his stewardship of the country was "proof we can live together in peace... as long as the leadership is wise."

But even independent observers agree, that during its near-decade of undisputed Communist party control Moldova has seen substantial demonstrations only once, in 2003.

Opposition parties may not have flourished, but at least they have not been subjected to government harassment, and elections over the years have been fair and open, the Organization of Security and Cooperation in Europe (OSCE) has said.

Nonetheless, Voronin has during his two terms of office engineered tweaks to the constitution stacking (his opponents say "rigging") the country's politics in favour of his party.

Voronin allies control most if not all of the country's electronic media, most of the profitable wine factories and tobacco plantations, and almost all Moldova's top banks, construction firms, and commodities exchanges, the authoritative Moldova. Politics web site wrote in an editorial.

Until the Communists were punished in the 2007 local elections, in which their former two-thids majority in Moldova's provincial governments was demolished, Voronin's party has held almost total control of the countryside as well

Moldova opposition newspapers routinely accuse Voronin of having become the wealthiest Moldovan citizen, from his cut of those businesses. Voronin has called such accusations groundless.

What remains clear is Voronin's intention to keep his hand in.

Recent polls show Voronin's Communists will capture a strong majority in the next parliament. What will come next, in many ways, was already spelled out in a recent gathering of Moldova's Communist party rank-and-file.

"(O)our party held a congress... And at this congress, I was again elected to lead the party," Voronin said.

Even though he personally may have opted for less stress, he promised: "I will be involved in the election campaign and in the political life of our country." (dpa)