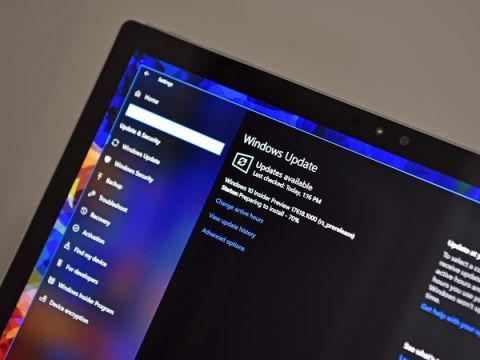 Microsoft has codenamed the next major update for Windows 10 operating system as Iron (Fe) and this update could be offering during first half of year 2021. Microsoft Windows May 2020 update could start rolling out next week as per reports. The May 2020 update from Microsoft has already been tested by many users who have opted for Windows Insider beta testing program. However, the Windows 10 update won’t be automatically offered to majority of users.

As May 2020 update is having some additional features, processor and other hardware companies will also release their updates. As per reports, Intel has already released DCH GPU driver with support for May 2020 Microsoft Windows Update. AMD and Nvidia are also planning to update their GPU drivers by the end of May or they would release updates by early June. The update will be rolled out gradually as Microsoft is still checking some hardware compatibility of the major update.

Microsoft Windows Iron Update has been also called Windows 10 21H1 preview and the first update to Windows Insider beta testing users could be rolled out by June 2020. As per blogs keeping a close watch on Windows updates, “Support for DxCore, D3D12, DirectML and NVIDIA CUDA is coming to a Windows Insider Fast build soon. The Fast ring is currently on our Manganese (Mn) OS branch. We expect the Fast ring to switch over to our Iron (Fe) branch toward the later part of June which will expose this new functionality to Insiders.”

As per Windows official blog, Fast Ring Insiders will get early access to Windows 10 21H1 preview. Some issues reported by Insiders program users regarding Windows 10 21H1 have been rectified by Microsoft developers.

As per a TweakTown report, “Microsoft will push out Windows 10 version 2004 in the coming weeks, while a second update '20H2' expected after that. The Start menu changes and refreshed UI won't make it into the public version of Windows 10 until the first half of 2020 with Windows 10 21H1.”

We’re looking into an issue where some devices booting from eMMC storage may bugcheck when resuming from hibernate.
We’re looking into reports of the update process hanging for extended periods of time when attempting to install a new build.
We’re working on fixing an issue for a future Insider Preview build where in Settings > Privacy the Documents and Downloads sections show a broken icon next to their page name (just a rectangle).
We’re looking into reports that taskbar preview thumbnails aren’t rendering consistently (showing a blank area).

Microsoft developers are also working on an improved version of Edge Browser. Developers will have more tools to work with and the new version of Edge will offer much higher flexibility. Microsoft announced, “Over the last few months, we’ve worked to support that community with improvements like DevTools localization in 10 new languages, which has been adopted by many of you as you develop for Microsoft Edge.”