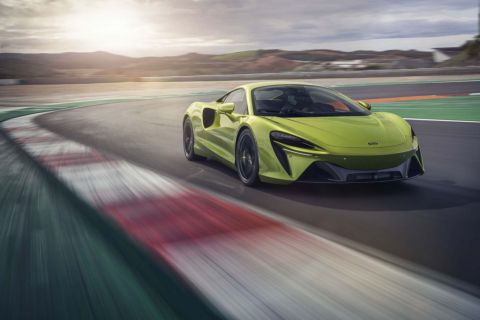 In line with the trend, McLaren has vowed to pivot toward EVs, and phase out production of fossil fuel-based ICE models by the end of this decade. Like any other PHEV, the Artura hybrid can be defined as a vehicle equipped with an engine that can switch between fossil fuel like petrol and an alternate fuel like electricity.

The Artura PHEV, which has been designed and developed by the McLaren Technology Center, is going to be the company’s first hybrid supercar to debut this year. While supercar manufacturer has embarked on the way to produce electric cars, it is not expected to release a fully electric vehicle before 2025.

Rob Melville, design director at McLaren, said that they focused on three technical design ideas, viz. purity in the overall look of the vehicle & components within it, its technical sculpture, and the functional jewelry.
Speaking about the new PHEV, Melville added, “McLaren doesn’t decorate its cars, it simply adds everything the vehicle needs and makes it beautiful. The Artura will rewrite the rulebook on what an electrified supercar can be.”

The new EV is not the first PHEV produced by McLaren as the company’s fleet already includes the previously produced P1 and the Speedtail hyper-GT. However, the supercar maker’s design approach to the Artura PHEV is a clean slate compared to previous PHEVs. The Artura features all new McLaren Carbon Lightweight Architecture (MCLA), an all-new hybrid powertrain, new aerodynamics, with enhanced cooling and ergonomics. New electric wiring has been used to support new features like Adaptive Cruise Control (ACC) and Apple Carplay. It is expected that the Artura’s features will serve as the base for the company’s more hybrids in the future.

According to McLaren, The hybrid powertrain comes equipped with a V6 engine with direct injection, and it is capable of generating 680 PS (671 HP) of power and 720 Nm (531 ft-lb) of torque, of which 95 PS comes from the electric motor. On the exterior, it features 19-inch wheels in the front and 20-inch wheels in the rear, a laser-cut mesh that helps in optimizing cooling across the rear zone, and ultra-slim LED blade lights outside of lookalike exhausts.

However, all those eye-catching features come at cost. The base model of the Artura PHEV starts at $225,000.