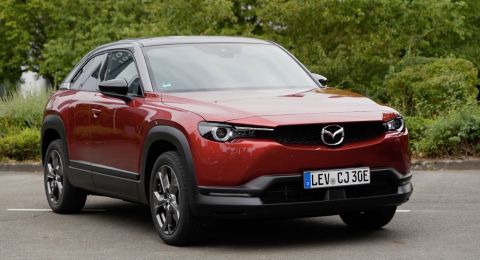 Japanese multinational automobile manufacturer Mazda Motor Corporation has confirmed that its plans to reintroduce its signature rotary engine as an electric vehicle (EV) range extender in MX-30 crossover. The Hiroshima-headquartered automobile giant’s chief executive officer, Akira Marumoto, said that the company would use the range extender in the Mazda MX-30. Marumoto added that testing of the company’s signature rotary engine in electric crossover would commence later this year, but he declined to provide any other details. However, the top executive’s statements confirmed something that the manufacturer has hinted at different times over the past many years but the company previously never officially confirmed the plan.

It was initially in 2017 when the company’s then-head powertrain development official Mitsuo Hitomi had hinted that a rotary engine could be used by the company as a range extender in an electric car sometime in the future. Prior to that, the company had filed patents for a rotary range extender and teased the plan with a variety of concept and prototype electric vehicles. For instance, the company suggested in 2018 that it could use a rotary range-extender in its e-Palette autonomous people-mover project, which is being developed by the company in partnership with renowned automaker Toyota.

The plan first revealed in a Japanese-language video posted to Mazda’s official YouTube channel on Wednesday, and it was first spotted by the popular automobile news website Autoblog.

The reports about the possibility of a new Mazda rotary engine, even in the form of a range extender, were welcomed by Mazda fans and car enthusiasts. For several decades, the Mazda was the one and only auto manufacturer to use the widely-acclaimed Wankel rotary engines. It was most outstandingly used in the company’s RX-7 sports cars. Since the end of production of the RX-7 sports cars in the year of 2011, the company has never produced a vehicle powered by the rotary engine.

The Mazda MX-30 is an electric & hybrid compact crossover sports utility vehicle (SUV). Based on the CX-30 design and structure, it was introduced at the 2019 Tokyo Motor Show. Production of the Mazda MX-30, which is the company’s first mass-produced electric vehicle, started at its Ujina-based manufacturing unit in May this year. It is expected to hit Japanese roads before the end of this year, and is scheduled to go on sale in the United Kingdom in the first quarter of 2021.