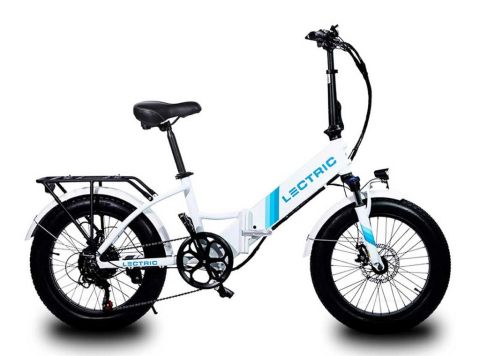 Phoenix, Arizona-based Lectric eBikes, the fast-growing company behind the mega-popular Lectric XP line of e-bikes, has announced a new battery upgrade compatible with its XP 1.0 and 2.0 electric models.

The already popular Lectric XP 1.0 and 2.0 electric models are now able to deliver more range on single charge as the American e-bike manufacturer has introduced greater battery options for commuters to choose from. Initially, the Lectric XP 2.0 foldable fat tire bike was introduced with a 460 Wh battery. However, the manufacturer is now offering upgraded 48V and 14Ah battery that has a significantly greater 672 Wh capacity.

The upgraded battery is a significant advance as it promises to add to 45 per cent more range to the e-bike. The manufacturer also announced that the upgraded battery is compatible with the original Lectric XP 1.0 e-bike, which is certainly a matter of delight of many as this electric model has thousands of units on U.S. roads.

The larger battery is physically of the same size as the initial battery, but it gets a higher energy density that allows it to store more energy. Levi Conlow, Lectric's co-founder and chief executive, explained in an article that the company decided to introduce the new battery following a survey that revealed that Lectric owners wanted to use the e-bikes for frequent longer rides.

Explaining the need for upgraded battery, Conlow said, “Following a survey of Lectric riders, we recognized that there’s this very real appetite from not just prospective customers, but also existing customers for the ability to go on longer rides. I don’t want people to feel concerned that they might run out of battery, so we set out to eliminate that concern by offering this Long-Range battery.”

The $999 Lectric XP 2.0 folding e-bike can now be had with the new long-range battery. On an existing order, one can get upgraded battery by paying an additional $200. However, the upgraded battery can also be purchased separately for $500.

According to Levi’s claims, pricing for the new battery is designed to beat all major competitors in the industry. A little bit of fact-checking proves that the e-bike maker’s claims are mostly correct as the same size battery from major competitors like Rad Power Bikes and Aventon costs nearly $550.

The new battery upgrade compatible with its XP 1.0 and 2.0 e-bikes will surely give riders more confidence to conduct longer rides.