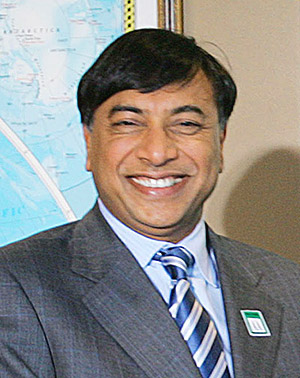 New York: According to Forbes’ India’s ‘40 Richest’ list for 2007, Lakshmi N. Mittal, steel-manufacturer has topped the list of Indian billionaires for the fourth year with a personal fortune of $51 billion.

Mr. Mittal is being followed by Mr. Mukesh Ambani whose net worth zoomed to $49 billion due to a bull run in the Indian stock markets. Mr. Anil Ambani, owner of the India’s second-ranked mobile carrier, is on third spot with a net worth of $45 billion.

Realty king Kushal Pal Singh of DLF is crowned the fourth place on the India rich list with a net worth of $35 billion. DLF Ltd got listed in July.

Giving overall thanks to the booming stock market, Forbes stated, “The four richest Indians are worth an astonishing $180 billion.”

“...[T]hanks to the roaring Mumbai stock market, with the benchmark index gaining as much as 53 per cent in the past year and a strong rupee that appreciated 12 per cent, for the first time, all India rich-listers are billionaires,” the magazine said.

The minimum wealth required to make it to the list was $1.6 billion as compared to $790 million during last year.

“In aggregate, their wealth surged to $351 billion, a bit more than double of last year’s $170 billion, making India’s 40 by far the wealthiest such group in all of Asia,” the magazine added.

Among the 54 Indian billionaires identified by Forbes, there are seven real estate developers with a net worth of over a billion dollars each.

Except Rahul Bajaj, whose wealth remained flat at $2.3 billion, 29 people who returned to the list turned wealthier as compared to the previous year.