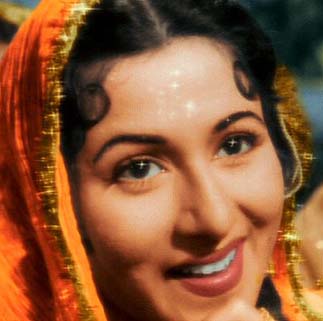 Madhubala: Arguably the most beautiful artiste to ever grace the Indian screen, Madhubala rose from humble beginnings to become the most captivating star India has ever produced. Madhubala was born Mumtaz Jehan Begum in a poor, conservative family of Pathan Muslims in Delhi, a part of a prolific brood of sisters, and entered the world of films at the tender age of eight. After about five years of playing child roles, Madhubala got her first break in a lead role in Neel Kamal (1947), produced and directed by her mentor, veteran filmmaker Kidar Sharma. It has been often said that her beauty overshadowed her acting talents, which to an extent is true; however this was more due to poor judgement than lack of talent. Being encumbered by a large family to support, and forever living under the domination of an imperious father who, she made several poor choices in movies which seriously undermined her credibility as a serious performer, to the extent of being labelled "box-office poison".

Awards: Nominated for the Filmfare Best Actress Award for Mughal-E-Azam.

When Madhubala was an infant, an esteemed Muslim spiritual man predicted that she would earn fame and fortune, but would lead an unhappy life and die at a young age.

Screen name Madhubala given to her by veteran actress Devika Rani.

Filmaker Mohan Sinha taught Madhubala to drive a car when she was only 12 years old.

She was an avid fan of Hollywood and after learning to speak fluent English, frequently watched American movies on her home projector.

When nervous she suffered from uncontrolled outbursts of giggles and laughter which sometimes antagonised co-stars and directors.

After she was diagnosed as having a hole in her heart, she put on a brave face and her illness was kept a secret from the industry for many years. She frequently used to cough up blood on sets, and eventually her illness forced her to end her career.

She and Dilip Kumar met on the set of Tarana (1951) when she was eighteen years-old. While filming, she sent her hairdresser with a note written in Urdu along with a red rose asking him to accept it if he loved her, which intrigued and amused him and so he accepted the rose.

She and Dilip Kumar had a seven-year courtship, but abruptly ended when she could not face her father's opposition to Dilip and ultimately had to bow out of B. R. Chopra's film opposite him following a scandalous court case.

She was proposed to by Bharat Bhushan, Pradeep Kumar, and Kishore Kumar. She eventually married the latter of the three, Kishore, who converted to Islam to marry her.

When Guru Dutt first announced his classic film Pyaasa (1957) it was with Madhubala and Nargis in the feminine lead roles. The parts were eventually played by Mala Sinha and Waheeda Rehman who both became stars with the film.

With the exception of Geeta Dutt in Mr And Mrs 55 (1955), most of Madhubala's memorable songs were dubbed by Lata Mangeshkar or Asha Bhosle. Madhubala proved lucky for both. The songs from Mahal picturised on Madhubala in 1949 were some of Lata's earliest successes; nine years later, Asha's vocals for the actress in four 1958 films established her as a major playback singer, rivaling her own sister, Lata.