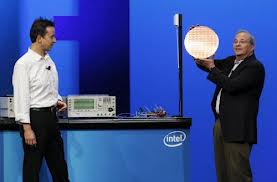 Positioning Intel’s ‘Moore’s Law Radio’ as the chipmaker’s first step in the direction of enabling an ever-connected, wireless world, Rattner said that the digital Wi-Fi radio follows the same Moore's Law development methodology which the company follows for its processors.

With the technology promising enhanced performance and increased power efficiency with its every new iteration, Rattner revealed that Intel first intends integrating the technology into its processors which power mobile devices like smartphones and tablets.

Noting that the radio will facilitate wide-ranging devices - from smartphones to high-tech supercomputers – in sending signals and wire-free communication, Rattner said that the device will essentially form the base for the "The Internet of Things," whereby devices and home appliances will exchange data wirelessly and be operated remotely.

Meanwhile, unveiling the new wireless standard called WiGig, Rattner said that the new standard – scheduled to be released in 2013 – will pave the way for wireless docking stations for laptops; and demonstrated the capability with the help of a Samsung Ultrabook and two high-definition monitors.

Touting WiGig as an extremely fast wireless standard which will allow users to wirelessly dock their enabled Ultrabook, tablet or smartphone without wires, Rattner said: "Even multiple displays can be docked at one time."