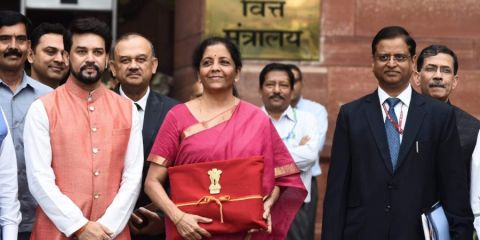 Indian markets ended the week with mixed sentiments among investors. The government took some action to address investor concerns but as the Indian currency continued its downward slide, questions were asked among Indian economy. While majority of companies have reported decent earnings in the last quarter, the overall economy is looking weak.

Nifty rebounded more than 2% on the first trading session of this week and then traded in a range of with 11140 (now acting as resistance) and 10785 as support in this week.

On Friday, the Benchmark Nifty50 recovered from the bottom level of 10870 levels and again come to near to at day high of 11042 and closed at 11032.20 levels with a gain of 74.95 points or 0.69 percent on a daily basis and on a weekly basis the open interest has also increased in Nifty futures.

On the technical chart, RSI rebounded from 36.81 level and is now placed at 42.70 level on the weekly chart and on the daily chart, in Bollinger band too, we saw some support from lower levels and closing at the middle of the band that is indicating a possibility of short term trend reversal.

Next week there could be upward movements in Nifty50 and we may see a breach of 11,250 levels on the upside which may fuel further rally.

The finance minister’s announcement about the merger of banks is a very smart move that will boost the capacity of banks to serve the need of the business sector with more prudence and comprehensive risk management. We may see a sharp move on bank nifty and an upward movement in banking stocks for the short term.

Stocks of PSU Banks, Metal and Pharma sectors could be outperformer while IT and Media sectors will be range-bound.

In India, on the occasion of Ganesh Chaturthi (2nd Sep.2019) will remain closed on Monday, On the international front there would be US Manufacturing data on Tuesday, ADP Non-Farm and Crude oil inventories data release on Thursday, Unemployment data of US on Friday.