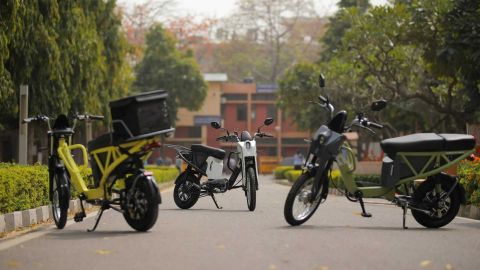 Indian startup Geliose Mobility has announced the launch of a new electric scooter called “HOPE,” which claims to be the most cost-effective EV for delivery and local commuting. Incubated at IIT-Delhi, the e-scooter HOPE trims down the travel cost to less than a quarter of a rupee. According to the startup’s claims, the new internet-connected electric scooter costs just 20 paise per kilometer, unlike a petrol-powered internal combustion engine-based scooter that costs roughly Rs 2.5 per km.

Aditya Tiwari, founder of the startup, said, “It is an affordable internet-connected scooter which we have launched in the market. It is budget-friendly which means that unlike petrol scooter which costs Rs 2.5 per km, this one costs 20 paise per km.”

The internet-connected, affordable electric scooter will be available in two options. The top-specification battery pack will deliver a range of 75 km on a single charge, while the lower-spec powertrain setup will deliver a range of 50 km. However, both options features a 250-watt hub-mounted electric motor paired with a portable Li-ion battery and both can run at a top speed of 25 km per hour. The portable Li-ion battery can easily be charged through a normal socket, and it takes four hours for it to get fully recharged, using onboard portable charger that is provided along with the e-scooter.

It also comes with a pedal-assist that can be used for improving riding range. It also has a special reverse mode in the EV for parking assistance. At both ends on the scooter, the suspension is handled by telescopic units. Braking is performed via a drum brake setup at both ends. Other notable features include an all-LED lighting setup along with an all-digital instrument cluster, IOT-enabled apps for data analytics, lightweight frame built for ultra-modern usage.

Both options come under the discount category, which brings significant discounts in the form of EV subsidies and incentives. In addition, the e-scooter doesn’t require a driving license or registration. All those features, as the startup expects, will help attract a large number of potential buyers.

Aimed at last-mile connectivity, the Geliose Hope is available with a starting retail price of Rs 46,999 (ex-showroom Delhi). Bookings are open now for Delhi-National Capital Region. Other cities will get in the second half of the year.