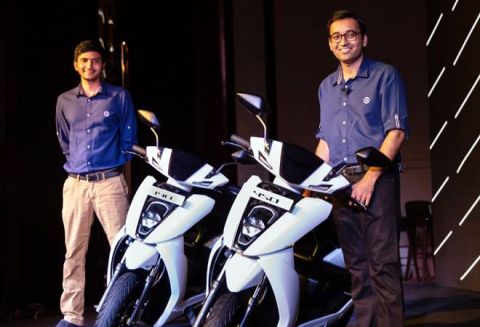 Indian electric vehicle (EV) manufacturer Ather Energy has announced plans to increase its annual production capacity to three times of its current capacity within two years if the trend of rising demand continues.
Currently, Tamil Nadu-based Ather Energy has a production capacity of just around 1 lakh (100,000) units per annum, which is equivalent to 9,200 units per month. But, the facility is not running at the top of its current capacity. It means it is rolling out a much lower number of electric scooters. It is producing merely one model, the Ather 450X, which is available with a price tag of around Rs 1.5 lakh.

In the past couple of years, the company has seen an unprecedented rise in demand for its electric two-wheelers, which prompted the company to think about increasing its production capacity to meet growing demand in the future.

Now, the company is mulling plans to treble its annual production capacity to around 3 lakh (300,000) units annually by the end of FY2023, of course if the ongoing demand trend continues.

Revealing the plans, Ather Energy’s Co-founder & chief executive officer (CEO) Tarun Mehta said, “Currently, we can roll out 9,200 units a month from the Hosur plant that we commissioned in February. Given the rise in demand/inquiries now, we are planning to treble our capacity by the end of the next fiscal.”

The manufacturer hopes that it will reach its current full capacity by the end of this fiscal year. Thus, it has become almost inevitable for the company to increase its capacity. Mr. Mehta explained that the first phase covers an area of 1.2 lakh square feet, and it would have to be expanded to 4 lakh square feet to improve the output. He stressed that the company’s Hosur, Tamil Nadu-based manufacturing facility has enough land to boost its production capacity to 5 lakh (500,000) units per annum.

Thus far, Ather has invested Rs 650 crore since the launch of the company in the year of 2013. It started with a small manufacturing facility in the city of Bengaluru, from where it had rolled out the first EV model Ather 450 in 2018.