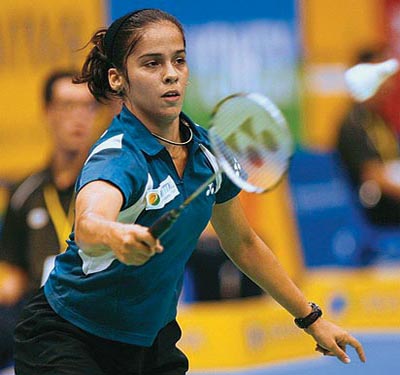 India's badminton ace Saina Nehwal, who created history by bagging three titles consecutively and is on the third place in the world ranking, stated that she was positive of becoming the world number one player.

Saina also said that she would work even harder to be successful in the World Championship, Commonwealth Games and Asian Games.

But, she added that she would not push herself to be number one spot so fast but would work very hard to win all major tournaments.

"I am quite happy that I have reached number three spot. But it is important for me to work hard and win tournaments rather than focus on rankings. After winning three tournaments in a row, the confidence level has gone up. For me it is important to stay focused and keep working hard the same way, play selective tournaments so that I can stay injury free and play well in these tournaments," she said.

Saina won the Indonesian Open Super Series on Sunday to make a hat-trick of badminton titles in the three weeks.

Previously, she won the Indian Open Grand Prix and the Singapore Open Super Series. (With Inputs from Agencies)