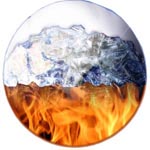 Washington, August 16 : Scientists have found that the warming of the northward-flowing West Spitsbergen current in the Arctic over the last thirty years has contributed to global warming by triggering the release of methane, a potent greenhouse gas, from methane hydrate stored in the sediment beneath the seabed.

Methane hydrate is an ice-like substance composed of water and methane, which is stable in conditions of high pressure and low temperature.

Scientists at the National Oceanography Centre Southampton, working with an international team, have found that more than 250 plumes of bubbles of methane gas are rising from the seabed of the West Spitsbergen continental margin in the Arctic, in a depth range of
150 to 400 metres.

Methane released from gas hydrate in submarine sediments has been identified in the past as an agent of climate change.

The likelihood of methane being released in this way has been widely predicted.

The bubble plumes were detected using sonar and then sampled with a water-bottle sampling system over a range of depths.

The results indicate that the warming of the northward-flowing West Spitsbergen current by 1 degrees Celsius over the last thirty years has caused the release of methane by breaking down methane hydrate in the sediment beneath the seabed.

According to Professor Tim Minshull, Head of the University of Southampton’s School of Ocean and Earth Science based at that the National Oceanography Centre, “Our survey was designed to work out how much methane might be released by future ocean warming. We did not expect to discover such strong evidence that this process has already started.”

While most of the methane currently released from the seabed is dissolved in the seawater before it reaches the atmosphere, methane seeps are episodic and unpredictable and periods of more vigorous outflow of methane into the atmosphere are possible.

Furthermore, methane dissolved in the seawater contributes to ocean acididfication.

According to Graham Westbrook Professor of Geophysics at the University of Birmingham, “If this process becomes widespread along Arctic continental margins, tens of megatonnes of methane per year – equivalent to 5-10 percent of the total amount released globally by natural sources, could be released into the ocean.” (ANI)