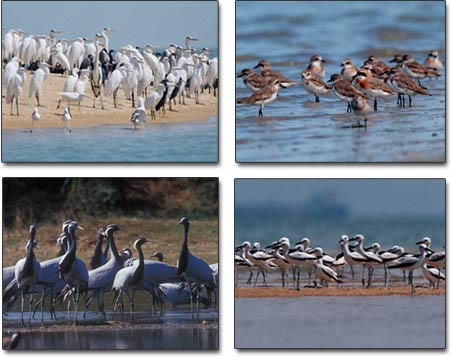 Jamnagar, Jan. 18 : Khijadia bird sanctuary in Gujarat is today home to over 300 varieties of migratory birds which prefer environs of both sea and fresh water.

Located 10 kilometres towards north east off Jamnagar, the Khijadia bird sanctuary has been nominated to be recognised as Ramsar site, the global index for prominent wetlands and mangroves favoured by birds.

Spread over an area of 605 hectare, Khijadia bird sanctuary is a unique wetland area with sea-water on one side and fresh water on the other side. It recorded more than
200 species of birds that nest here. Ninety species of waterfowl have been traced here. In 1982, it was declared a safe haven for birds.

"We have noted almost 300 varieties of birds; there could be more than that. Three types of nests are found here, one on the tree over the branches, second on the ground and third on water where floating nests are found. Here varieties of ducks make floating nests. For instance, the black-necked storks, which are not found anywhere, are found here in Khichadiya," said D. M. Dafadar, Ranger at the Khichadia Bird Sanctuary.

Ramsar defines wetlands encompasses coral reefs, peat forests, temporary pools, even underground caves besides marshes and lakes and all sorts of other systems including mountains to the sea and man-made habitats.

Before Indian independence, a check dam was built for storing the waters of River Ruparen just near the sea. Over the years with fresh water of the rain and river on one side and salt water of the sea on the other side, a unique area was formed here.

Both varieties of vegetation came up and in due course of time, birds and animals also started flocking and roosting here.

"Here at one side sweet water is found and on the other sea water and in between there is a narrow estuary. Such acclimatising and nourishing habitat is difficult to find anywhere else because big birds like black necked stork, pelican, and yellow-billed storks eat large fish which they can find either in sea water or sweet water,” said P. R. Sindhia, Forest Officer, Khichadia Bird Sanctuary.

“Besides the varieties of ducks like Gadwal, Gadgil, Ton, Spoonbill, and Herons also fulfill their food requirements from salt and sea water. And mangrove supports their roosting," Sindhia added.

As the sanctuary is located on the western-most part of the country that falls on the traditional route of the migratory birds, a large number of birds nest here in the winters.

Domestic and foreign tourists visiting the region are overwhelmed to see the vast varieties of birds. Nilgais, which are on the verge of extinction, elsewhere also live in this sanctuary.

There are three watch towers for bird watchers, as well as inspection paths leading deep into the foliage. There is also provision for paddleboats to go around.

The sanctuary has three freshwater lakes, mangroves, tidal mud humps, salty beds and everything which the migratory birds and waders need.

Two dams were erected by the erstwhile ruler of Jamnagar in order to avoid seeping of water from adjacent River Ruparen during high tides.

Watching the arrival of the cranes during sunset for roosting is a fantastic experience.

As for the other animals, apart from Nilgais, one can spot jackals, wolves, jungle cats, mongoose, rabbits and certain snakes like the cobra at Khichadia bird sanctuary. (ANI)