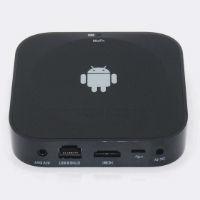 Tech giant Google is reportedly preparing to introduce its wireless content streaming device, dubbed Android TV, which will go compete with the likes of Apple TV, Amazon's Fire TV and the Roku system.

Emerging reports, which could be part of Google's supposed effort to create buzz for Android TV, suggest that Google is gearing up for a formal introduction of the device.

As per some unconfirmed reports, Google's Android TV will not focus to be a platform for computing; rather it will focus on providing interactive entertainment content. It will enable users to locate and access the content of their choice easily.

Amazon, for instance, recently launched its Fire TV, which will allow it to sell movies, games, apps and whatever else the company has to sell, directly to owners through televisions. Owners of Fire TV can buy a song from Amazon's music store; instead of buying it from Apple's iTunes. Thus, launch of Android TV will allow Google to turn consumers to its own Google Play store.

With all the competition from rivals like Apple, Amazon and Roku; Google will surely have to come up with its own angle to lure consumers away from their current content streaming devices. However, Android is one of the best-known brands and therefore it will likely not have make much efforts to attract consumers. As of February last year, Android OS accounted for around 70 per cent of all smartphone devices.