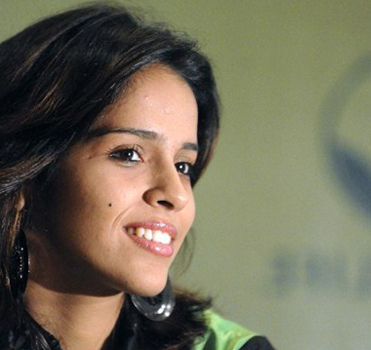 New Delhi, May 14 : Top shuttler Saina Nehwal believes India have "very good chances" of reaching the quarterfinals of the Uber Cup to be held at the Siri Forts Sports Complex here May 18-25.

"We have been training hard for the last one month. We did well at the Asia Championships recently where P. V. Sindhu and women's doubles pair of Jwala Gutta and Ashwini Ponnappa won bronze medals. We have a very good team and personally I believe we have very good chances of making the quarterfinals of the Uber Cup," said Saina.

India have drawn Thailand, Canada and Hong Kong in Group C of the Uber Cup with Saina named as the captain.

"This is a team event and I will give my best to win matches. I am hoping to come out in prime form. The first singles is very important. There will be pressure to perform but that is always there. Competition is very tough but we hope to have good matches," added the Olympic bronze medallist.

The 24-year-old started the year on a high, winning the India Grand Prix Gold in Lucknow in January, her first title in 15 months. But since then she has only been able to make the quarterfinals at All England, Swiss Open and India Open with a first round exit in her last tournament -- the Singapore Open.

"Expectations have been always there when I am playing. Winning and losing is part of the game and it keeps happening. But my job is to keep working hard which I am doing because you can't be sure when mistakes happen. And then you never know when you win a tournament," said the World No. 8.

"I am feeling fit. Sometimes when people expect from me, they only see wins and not the quarterfinal and semifinal performances which I achieve. I know wins are important and can happen anytime but form is not permanent. Even top Chinese players Shixian Wang, Li Xuerui and Yihan Wang go through ups and downs."(IANS)