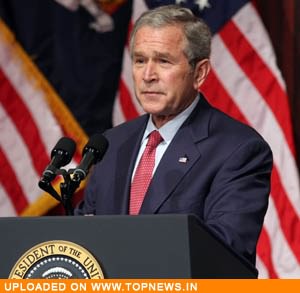 Washington, Sept. 5: In a new 487-page book that is to be released on September 8, noted Washington Post journalist and author Bob Woodward has termed US President George W. Bush "the nation’s most divisive figure."

In the book titled “"The War Within", which is the fourth installment in a series of books that he has written on the president, Woodward criticizes Bush for failing to fulfill what some might view as impossible expectations.

"He has not rooted out terror wherever it existed. He has not achieved world peace. He has not attained victory in his two wars (in Iraq and Afghanistan)," Fox News quotes Woodward as saying.

He also observes that seven years in the White House has "taken a visible toll" on Bush, who "has a noticeable paunch and sometimes slouches in his chair."

Woodward, who has written two books praising President Bush and then a third harshly criticizing him, also says that: "too often he has failed to lead."

The new book is less critical than Woodward’s last tome, "State of Denial," which savaged Bush for his execution of the war in Iraq. "Denial" ended with the line: "With all Bush’s upbeat talk and optimism, he had not told the American public the truth about what Iraq had become."

Woodward repeats the line in his new book, adding: "My reporting for this book showed that to be even more the case than I could have imagined."

Bush refused to grant an interview to Woodward for "Denial," but gave the author several interviews for "War Within." Such increased access did not seem to improve Woodward’s opinion of Bush.

"President Bush has rarely leveled with the public to explain what he was doing and what should be expected," wrote Woodward, now an assistant managing editor at the Washington Post.

Woodward acknowledges the success of Bush’s surge of additional troops into Iraq in 2007.