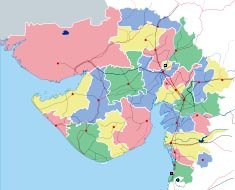 Dhingana (Gujarat), Sept 19: Villagers in Gujarat continued to face hardship as floodwaters have submerged more than 20 villages for the last three days.

The region has received heavy rainfall in last 24 hours and many places have turned into virtual islands making movement difficult.

Atleast ten villages including Dhingana, Loliyadeep, Thebra and Bagodara are worst affected as the rainwater has flooded the villages and life has become standstill.

"Though it has not rained here much, but the water from Saurashtra and Surendranagar has come here. The whole village is submerged. Water has entered all the houses, and our crops have been destroyed," said Naresh Patel, a villager of Dhingana.

At least 2,800 people were evacuated to safer places after the region continued to receive heavy rainfall for the third consecutive day.

Surendranagar-Ahmedabad Highway too was closed though no loss of life has been reported so far from the area.