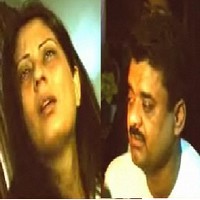 Chandigarh, Feb 2, : Fiza, the second wife of former Haryana Deputy Chief Minister Chandra Mohan, claimed on Monday that he had blackmailed and begged her to marry him.

Formerly known as Anuradha Bali, Fiza claimed that Mohan who had changed his name to Chand Mohammad could leave the country any time.

She told reporters here that she was afraid for her life.

"I don''''t even know if I will be alive tomorrow to say these things before you all," she said.

Bali and Mohan had secretly converted to Islam in November last year and were living as a husband and wife till a few days ago.

They came into focus last week when Fiza claimed that Chand Mohammad had been kidnapped by his brother Kuldip Bishnoi.

Chand Mohammad was later found in Delhi, where he claimed that he had come on his own after a tiff with Fiza.

Fiza read out several SMSes purportedly sent to her by Chand Mohammad expressing his love for her.

"He used to send me messages for the last three years. He used to blackmail me that he will kill himself if I did not marry him," she said.

Fiza said that she would seek revenge.

She also refused to give up her Muslim religion. (ANI)