Ferguson takes another swipe at Benitez 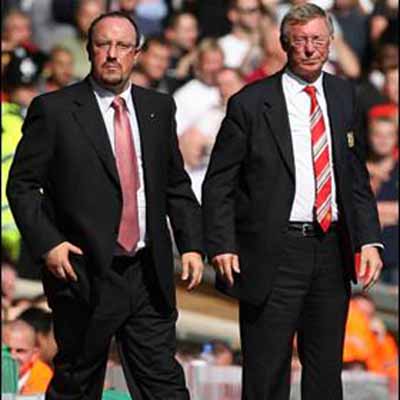 London, Apr 11 : Manchester United boss Sir Alex Ferguson upped his war of words with Rafa Benitez by suggesting that the Liverpool coach was guilty of taking his eye off the ball ahead of club's Champions League defeat to Chelsea in midweek by talking about him rather than the task in hand.

Ferguson took another swipe at the Merseyside club by claiming that Chelsea, fuelled by their win at Anfield, were now the biggest threat to United's hopes of completing a hat-trick of Premier League titles.

He suggested that relegation-haunted Blackburn - managed by his close pal Sam Allardyce - could pull off a shock result at Anfield today, The Daily Express reported.

Ferguson could not resist the invitation to answer Benitez's midweek claim that the fact he spent so much time talking about Liverpool suggested he was "scared" of them.

"The interesting thing as far as Rafa Benitez is concerned is that he's got a European tie, and he's talking about Alex Ferguson. Fantastic! I didn't know I was that important," Ferguson said.

"If you ask me a question about other teams I'll give you an opinion. There's no fault in that. Arsene Wenger was talking about Manchester United a couple of weeks ago (when Wenger said United looked untouchable), which I tried to dampen down as much as I could because I know the dangers of that. But he was asked a question and he gave a fair answer to the question."

Ferguson had predicted before the game that the winners of the Liverpool-Chelsea tie would emerge as United's biggest threat because of the adrenaline surge they would enjoy.

"Chelsea will be very buoyed up. You saw the celebrations at the end. They played very well, and they knew it was an emphatic result. They will be flying now," he added. (ANI)