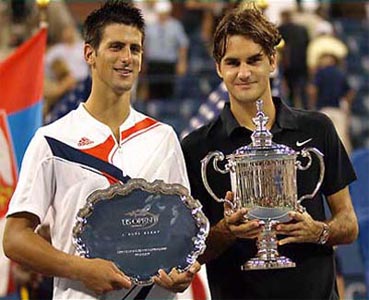 Miami  - Former champions Roger Federer and Novak Djokovic revved up their game with overwhelming opening wins to power into the third round of the Miami Masters on Friday as seeds took centre stage.

Federer is trying to recover after losing in the semi-finals last weekend at Indian Wells, with the Swiss player, 31-8 in Miami, looking for his first title of the season.

"This is an important week for me to do well, especially now that I have matches again under my belt," he said. "I'm into the third round here, so I feel like things are going well for me again.

"Last season was really tough, some people forget I had mono and had a bad back. But I was moving well (in this match). I tried to get many balls back."

For the first time since 2003, when he stood fourth in the world, the 27-year-old comes to town not atop the ATP rankings. Federer's victory in 64 minutes improved his 2009 record to 14-3.

Djokovic may have solved the puzzle of the slow starts which have characterised his year so far.

The Serb said his game clicked into gear instantly as he began in Miami.

"In most of my first round matches this year I haven't gotten the right rhythm. But today I was pretty happy with the way I started this tournament," he said.

"Today I played the right game, the concentration was a quite important key today," said Djokovic, the Indian Wells quarter- finalist who collapsed last week against Andy Roddick.

The Serb third seed went through in an efficient 70 minutes with three breaks of number 117 as the 2007 champion posted his second victory over Dancevic.

Djokovic improved to 18-7 during a season that included his 12th career title in Dubai.

"It's a little windy, a little humid, but the kind of conditions you expect here in Miami. It was good to get a win," said Blake, who compared the intensity of the Masters 1000 competition to that of the Grand Slams.

"Out Masters 1000s, they're all huge because you got the top players. I think they might be just as tough or almost as tough as a Slam to win because you're playing so many great players so quickly. You don't have any time to ease into it."

German Nicolas Kiefer staged a fight back over Frenchman Fabrice Santoro 5-7, 7-6 (7-5), 6-2 to earn a third-round place against Federer.

Russia put four women into the third round, with second seed Safina leading the way past France's Mathilde Johansson 6-1, 6-3.

Safina, who missed a chance to seize the number 1 WTA ranking from Serena Williams last week in Indian Wells when the American did not play, paced fourth-seeded compatriot Elena Dementieva, a winner over Anastasia Pivovarova 6-0, 3-6, 6-3.