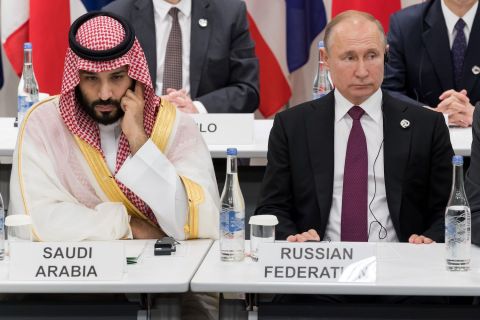 Crude oil has faced major decline in the recent months and investors have been closely following the trends in the energy sector. The timing of war for dominance between Saudi Arabia, Russia and United States couldn’t have been worse. While Saudis and Russia started the crude production & price war around March 12, countries across Europe and the United States started taking COVID-19 threat seriously around March 15.

After facing major decline in crude valuations and selling crude at additional discounts to market price, Saudi Crown Prince finally agreed to reduce production. Russia was also dragging feet about reducing crude production but looking at the price charts for oil, Russians also agreed to reduce their production. United States has been dealing with the worst health crisis amid coronavirus and its dominance in the energy markets could be challenged as many production facilities have closed due to low oil prices.

As per the latest news, Russia has managed to grab a major portion of Chinese imports of crude oil from Saudi Arabia. After suffering revenue loss and reduced price per barrel, OPEC countries have united once again to support oil prices.

The next major blow to crude oil came with reports of no space left with majority of oil producers and refineries to store the oil. Even the storage capacity in the ocean liners has been exhausted, leading to higher cost for storage.

Amid all the chaos in the energy markets, recent reports suggest that production cuts will start having an impact in few weeks and we could see crude stable around USD 20-25 per barrel. Energy majors are also bracing for tough times while governments relying on crude oil for managing their budgets have unprecedented situation staring at them.

While traders in oil markets will continue painting grim picture, we expect that crude will be stable in the near future as many countries will lift lockdowns and try to revive economic activity.