Eminem eyes sex with Sarah Palin in ‘We Made You’ video 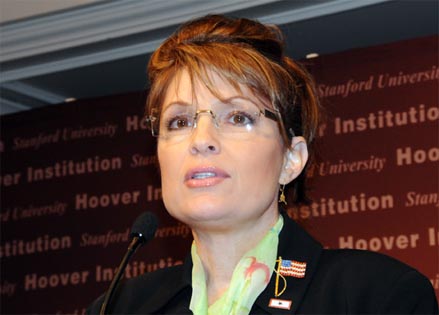 New York, April 9 : Eminem has put Alaska Governor Sarah Palin under the firing line, depicting her in a raunchy sequence in the video of his new song.

The rapper, who has been on hiatus since 2005, whips other celebrities including Lindsay Lohan, Kim Kardashian, Amy Winehouse, Jessica Simpson, Ellen DeGeneres and Britney Spears in the `We Made You' video.

The song, his first single from his comeback album `Relapse', out on May 19, shows a woman dressed as Palin in a skirt and bustier splayed out on an office desk.

Eminem makes the sexually explicit taunt as he appears to dress as her husband Todd Palin, reports the New York Daily News.

Lines of the song read: "Well I can be as gentle and as smooth as a gentleman, Give me my venom, an inhaler, and two Xenadrine, And I''''ll invite Sarah Palin out to dinner, then Nail her, Baby, say hello to my little friend."

The 36-year-old also tongue-lashes Jennifer Aniston, who he says should be with him, and not her on and off boyfriend John Mayer. (ANI)