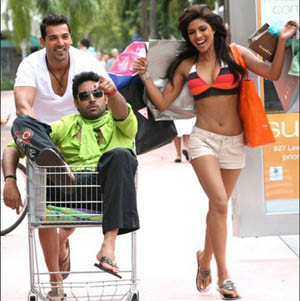 Friday release - 'Dostana' - is a path-breaking Bollywood film of sorts, considering the number of times the word 'gay' has been used in one film. The film, a barrel of non-stop laughs, features the usual concoction of romance, snazzy designer wear, exotic locales and foot-tapping numbers.

The cast of the film comprises actors like Abhishek Bachchan, Priyanka Chopra, John Abraham, Kirron Kher, and Bobby Deol. It is for the first time Bollywood's leading men are even pretending to be homosexual in the film.

The story goes thus - photographer Kunal (John Abraham) joins male nurse Sam (Abhishek Bachchan), in the hunt for an apartment. They turn lucky when destiny takes them to the abode of (Neha) Priyanka Chopra.

However, Neha's guardian aunt does not like the idea of the two strapping young men renting rooms in Neha's swanky condo. Sam then has the brainwave of confessing they are 'gay' - and would hence be the perfect flat-mates for a single woman.

As luck would have it, the pair of straight blokes pretending to be gay, fall head-over-heels for the vivacious Neha, who works for Verve magazine. Neha, meanwhile, is remains oblivious of it all, enjoying the company of her 'gay' best friends.

Neha seems head over heels for her boss Abhimanyu (Bobby Deol), thereby arousing the jealousy of Kunal and Sam!

Stripped to its bone, the basic premise of 'Dostana' is your fairly standard triangular romantic-comedy, but the manner in which writer-director Tarun Mansukhani gives this ordinary plot a whole new spin, by throwing in the 'pretend-gay' angle, turns it into a fun film - in fact, if all you want is a dose of non-stop entertainment, 'Dostana' is the movie for you!