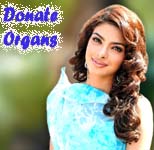 : Bollywood actress Priyanka Chopra today pledged to donate her organs, and said "one should understand the importance of organ donation because one lives for eternity."

She said that she realised the importance of organ donation when her father was ill.

Priyanka said organ donation could be scary for people who don’t have knowledge about its benefits, and added that donors are unsung heroes even after their death.

Chief Guest Union Defence Minister A K Antony lauded the efforts of Armed Forces for leading the way in organ donation, and wished them success in their future endeavour.

The Armed Forces Organ Retrieval and Transplant Authority (AORTA) has shown the way in organ donation, even in medico-legal cases, Antony said.

"The fast changes in the life style is leading to increase in liver diseases. I am happy to note that liver specialist from all over India have gathered here to discuss these issues," the Defence Minister said.

Antony appreciated medical fraternity for its efforts to treat patients suffering from liver related diseases and research in the field.

When asked whether other MPs will also donate their organs, Sidhu said that he knows about himself, adding that if parliamentarians were here they would have surely donated their organs.

The AORTA has even managed to get over 1,000 people to pledge their organs through an extensive publicity programme within the Armed Forces.

"Even in grief you can help," reads a small board at the Intensive Care Unit of six Army hospitals across the country, urging relatives to donate organs of their dear departed to help others.

The "board with a silver lining", as it is referred to by transplantation experts of the Armed Forces, invariably draws the attention of those waiting for that final confirmation of loss from doctors.