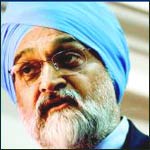 Mumbai: A top Government functionary said that the inflation rate based on the wholesale-price-index dropped, and the consumer price index (CPI) would also go down.

Montek Singh Ahluwalia, Deputy Chairman of Planning Commission said, “The wholesale price index (WPI) operates with a two-week lag and the CPI with a three-month lag....CPI will also come down.”

Mr. Ahluwalia said that bringing inflation down was a key sign of macro-economic success and the RBI has done this extremely well.

For the week ended September 8, inflation rate has dangled to 3.32 per cent from 5.22 per cent in the corresponding period of the last year (2006).

Point-to-point inflation rate, which is based on the CPI-AL and CPI-RL augmented from 8.60 per cent and 8.02 per cent in July to 8.80 and 8.51 per cent correspondingly during August.

Asked about Chidambaram’s acoustic projection of a 10 per cent GDP growth, the well-known economic expert stated, “continuing the (economic) reforms process, we can take the economy to 10 per cent growth at the end of the 11th Five Year Plan period (2007-12).”